April 20 or 4/20 has been recognized as a national holiday for marijuana lovers for several decades. Although the rumors are many, the most credible affiliation dates back to 1971 when high school students in Marin County, Calif. connected at 4:20 p.m. to smoke weed. According to these teens known as the Waldos, the meeting time was exactly 4:20 because school let out around 3 p.m. and some of them had after school activities which lasted until 4 p.m. The remaining 20 minutes allowed them time to arrive at the meeting place to smoke and look for pot fields. Since that time, National Weed Day has become a joint effort recognized by weed lovers as well as non-smokers.

Recently, a college professor learned about the “holiday” and joined in the celebration. A student notified the professor to let her know he would miss class on 4/20 due to a doctor’s appointment and not the other excuse others would have for skipping. The student wrote:

I know this sounds suspicious because plenty of people will skip class for other reasons on 4/20, but I can provide a note from the doctor if needed.

The professor wanted to know the other reason students would miss class that day and after learning about National Weed Day, the teachers canceled class and responded by saying, “Enjoy Wednesday!” As opposed to the “regularly scheduled program” the instructor decided to join the celebration and give the students a pass.

National Weed Day is a joint effort of cannabis culture. On the 20th day of April, there is something other than pollen permeating the sky. Not a plane, kite, or drone, it is the smell of marijuana as people gather across the globe to honor their “High Holy” day. It is a day of smoking and of course snacking. Seattle’s Hempfest and Denver’s 4/20 Rally are said to be the largest events focused on marijuana and both contribute to large amounts of weed smoke drifting into the sky. 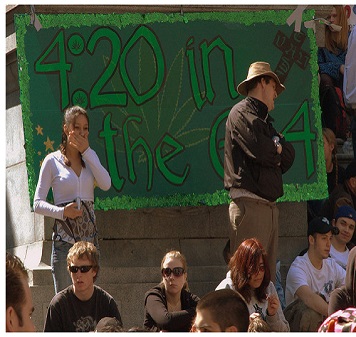 In keeping with the slogan, “There is an app for that,” the celebration of cannabis culture is no different. Several apps have been created to enlighten blunt lovers of the festivities surrounding their beloved holiday as well as dispensaries in the area. Some of the free apps for IOS and Android are WeedMaps, Leafly, Duby, MassRoots, and Seamless. These contain all the information pot heads will need to make this year’s 420 the highest and happiest day of all.

Although National Weed Day might be considered a joint effort which magnifies the cannabis culture, prior to filling the skies with smoke, blunt lovers need to know if they are in a 420 friendly state. Currently, there are four states which permit the use of recreational marijuana (with certain restrictions), such as Colorado, Alaska, Oregon, Washington (and Washington D.C.). Additionally, there are 23 states which have provisions for the use of medical marijuana.

The legalization of marijuana has been a debate for many years across the nation. Although many support the medicinal properties of cannabis, others stand firmly against its recreational use. Regardless of public opinion, advocates of marijuana continue to fill the skies with smoke in adherence to their annual 4/20 observance. Marijuana lovers, as well as non-smokers, participate in National Weed Day making the celebration a joint effort of cannabis culture.

MTV: A College Professor Finds Out What 420 Means and Does Something Cool About It
Time: Here’s the Real Reason We Associate 420 With Weed
Wired: All the Apps You Need to Make This 420 the Best 420 EVAR

2 Responses to "National Weed Day Is a Joint Effort"