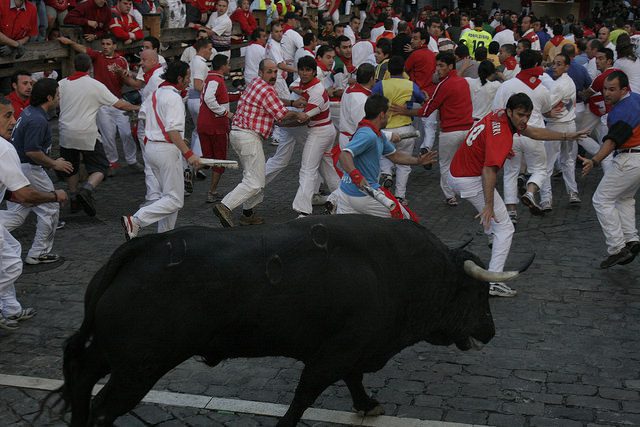 According to “The Telegraph,” on July 7, 2016, the initial run of the San Fermín running of the bulls was held in Pamplona, Spain. The Pamplona running of the bulls has remained popular in the modern world. Yahoo! News reported that the runners were wearing their traditional festival clothing including white pants and shirts with red neckerchiefs.

Pamplona is the annual host of the nine-day festival that showcased eight bull runs all starting at 8 a.m. UTC. In Spanish, the term bull run translates into encierros. On Wednesday, July 6, 2016, there were thousands of people gathered outside of the Pamplona town hall awaiting the Chupinazo. The Chupinazo involves people partying in the streets as a way to celebrate the start of the festival with the midday launch of a firework rocket the day before the first race.

Pamplona’s San Fermín running of the bulls festival was just as popular this year as it was in the past. It has been argued that author Ernest Hemingway renewed the popularity of the event by immortalizing the festival in his 1926 novel, “The Sun Also Rises.” Hemingway’s work has inspired foreigners from all over the world to visit Pamplona for the annual summer event.

During each encierros, the daredevils tested their strength, bravery, and speed by racing down the streets with six angry bulls. The street course is about 930 yards and ends at a bull ring, which is located in the center of the city. Generally, all six of the bulls each day are killed during the bullfights against the matadors each afternoon.

“Metro” explained that an American tourist, Matthew Levin, was injured during the 2016 running of the bulls when he was rammed by a horn into his thigh. While Levin was in the hospital to treat his wounds, he claimed the experience was one of the best of his life to date. This was despite the injury he endured.

Additionally, a matador, Victor Barrio, 29, was killed after he was gored by a bull during one of the afternoon bullfights. Following the traditions of the past, the bull was killed and so was his mother. According to the tradition, it is important to end the “killing bloodline.” The running of the bulls in Pamplona has claimed the lives of millions of people over its long history while injuring countless others.

The Daily Beast suggested that a small group of Americans gathered at a pub called Casa Marceliaro, which was well-known as the preferred hangout for Hemingway in Pamplona. The Americans were in Casa Marceliaro, toasting to three of their friends who were unable to return to Pamplona and would be unable to run with the bulls in 2016. Additionally, the group was able to confirm there is a ritual to visiting Spain for the festival, which included the runners returning to Casa Marceliaro at the conclusion of each race.

The spectators of the first encierros claimed the run was ‘clean and quick’ because there were few injuries reported. Nearly 30 minutes after the initial run, there was a report from the Red Cross that stated four people were transported to a local hospital with various injuries. These injuries included cuts, scrapes, and in one case, a fractured skull.

The initial run took the animals just under two and a half minutes to make it to the bull ring. The fastest recorded run was in 2015 when the animals made it to the bull ring in just over two minutes. The festival in Pamplona has remained popular in the modern world. It is important to note there has been little attention given to the complaints made by animal activists because of how deeply woven this festival factors into Spanish and international cultures.