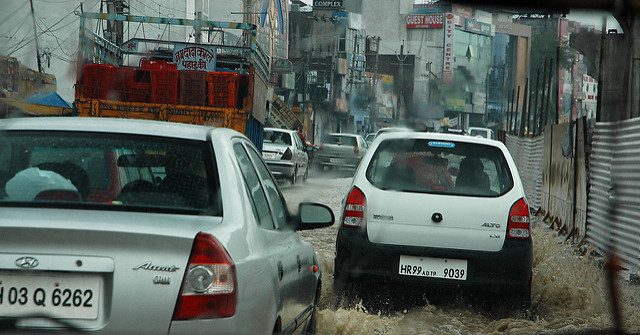 NDTV reported on Wednesday, Aug. 31, 2016, at 10:55 a.m. IST about torrential rains that hit New Delhi, the capital of India,  and threw life out of kilter. Delhiites woke up to a dark Wednesday morning, which was accompanied by heavy incessant rainfall and flooded roads and streets, all of which decelerated the moving traffic within an hour. This caused a lot of inconvenience to those en route to their offices, as evident from angry tweets posted that complained of heavy traffic jams.

Besides Delhi, the surrounding city of Gurgaon, which was recently renamed Gurugram, located in the State of Haryana. As well as the city of Hyderabad, a common capital for the State of Andhra Pradesh and the newly formed State of Telangana also fell prey to the pounding rains. Officials of the police department and meteorological department have issued warnings to people living in the affected areas, advising them to exercise caution on roads while traveling, especially with regard to maintaining patience and adhering to lane discipline.

Coincidentally, U.S. Secretary of State John Kerry, who is currently in Delhi, as part of his trip to India, was also forced to cancel his plans to visit religious sites in the capital owing to persistent showers.