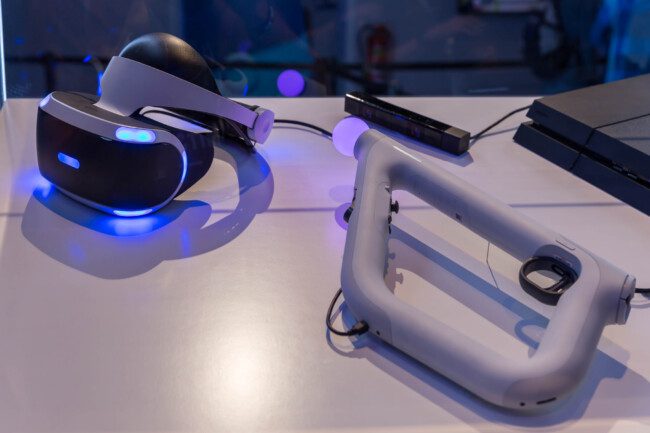 The PlayStation 4 (PS4) will be receiving a new hardware upgrade on Oct. 13, 2016, with their new PS virtual reality (PS VR) headset. According to Wareable, the new VR headset accessory is easy to set up. Simply connect the camera first, a required element to play the game, then follow the instructions for the Processor Unit.

Gamers need to remember that the cables become a pass-through for the HDMI. One goes from the television into the unit, the other from the unit to the PS4. It does not affect the HDR performance on the TV.

Unlike the commercials, PlayStation suggests gaming with the VR hardware while sitting down. There is not a need for room mapping. The recommended distance is around 5 feet from the camera, allowing enough room on both sides for lunging, ducking, and turning.

The PlayStation VR has blue lights that act as head tracking points and a padded crown section on the forehead. It weighs 610g and does not feel like it will slip down the player’s face. There is a pass-through camera that allows the gamer to see the real world. However, there is a button on the bottom of the headset that slides the screen back and forth.

Google’s VR headset, the Daydream View, costs $79 and comes with a wireless controller. Furthermore, the company also introduced the first Pixel phones, starting at $649. It runs Andriod 7.1 and has built-in VR support. The View is shipping in November, as reported by The Verge.

The PlayStation VR baseline cost is $399. However, the PS VR bundle is $499. It comes with a tracking camera and two Move controllers. The PS VR starts shipping in October.

The Facebook-owned Oculus Touch hand controllers start at $199. The controllers allow players to use their hands to manipulate simulated environments. Moreover, the company announced the Oculus Earphones will cost $49. The Oculus Rift is priced at $600 bringing the grand total to $799. The Rift will begin shipping in December.

Questions & Answers About the PlayStation VR

VR stands for Virtual Reality. It is the simulation of an alternate reality created by designers and programmers. The PlayStation VR system delivers a VR experience for players’ eyes and ears. This happens through a combination of the 360º, 1:1 tracking of the gamer’s head, the wide field of view, stereoscopic images with a refresh rate of 120Hz, and the binaural 3D audio. The combination causes the brain to think it has been transported to another world.

The PlayStation VR has a Cinematic Mode. This feature allows the user to watch content in 2D, which includes PS4 games and movies. Users can watch the content while wearing the VR headset.

The three separate waves of pre-orders have concluded.

Yes, the PlayStation VR displays what the gamer is seeing, in 2D, on their television set. This is a feature called Social Screen, which allows others to observe and sometimes play alongside the person wearing the headset.

The PU is a small box that comes with the PlayStation VR and connects to the user’s PS4 and television. It  enables Social Screen TV output, 3D audio processing, and Cinematic Mode.

There are approximately 50 titles ready to launch before the end of the year.

The PS VR is brand new but its game lineup spans across genres. Games include shooters like, “RIGS Mechanized Combat League” and “Until Dawn: Rush of Blood.” Puzzle games like, “SuperHyperCube.” Racing games, such as “Driveclub VR,” and horror like, “Resident Evil 7 Biohazard,” that are scheduled for release in 2017.

PlayStation VR compatibility will be shown on the front of the game case. It will say whether or not the Move Motion Controller is needed.

The PlayStation VR Will Dazzle Players

The vibrant, rich, and immersive display of the PlayStation VR has little visible lag, thanks to its less than 18m latency. The Vive is a higher end VR headset, therefore, if the gamer has used this headset before, they will notice the difference with PS VR right away.

Another bonus includes live streaming to Twitch, software like “The Playground,” and the up and coming, “Keep Talking and Nobody Explodes.” Owners of the PlayStation VR can expect some non-gaming content, in the form of shorts and VR films. Also, there will be a Hulu App available in the U.S., plus movies, such as “Invasion,” “The Martian,” and “Allumette.”