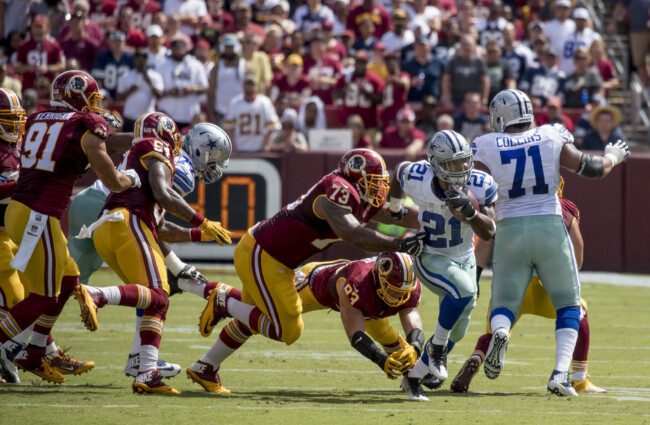 The Dallas Cowboys seem to be doing well this season. Ezekiel Elliot set a new record for the most rushing yards, over Tony Dorsett for the franchise record. Quarterback Dak Prescott threw over 300 yards and completed 75 percent of his passes.

Dorsett, who had held the record since 1977, and helped the Cowboys win Superbowl XII, was present to congratulate Elliot. Dorsett made history with 1,007 yards rushing, 12 of which resulted in touchdowns, and he managed this feat in 208 carries. He also added almost 30 receptions for 273 yards, with one resulting in a touchdown.

Sunday, Nov. 20, 2016, Elliott was a big part of the Cowboys’ 27-17 win over the Baltimore Ravens, who did not make it easy for the Dallas based team. He came into the game two yards shy of tieing Dorsett’s record, which he did on his opening run of the game. As the No. 4 pick in the draft, and the only 20-year-old rookie, makes his accomplishment that much more amazing.

Backup quarterback, Prescott was sent in to play for Tony Romo, who voluntarily stepped down for the good of the team. Prescott is only two years older than Elliott. The Ravens are one of the top defensive teams, in the league. The Cowboys’ win over The Ravens proves they can win when they are having a stroke of bad luck.

Winning nine consecutive games, then defeating a team they have not been able to beat gave over 93,000 fans, who were in attendance at the game, something to smile about. Especially after a controversial election that left America divided.

Football fans all over can rejoice in this accomplishment. However, this does not mean the team is unbeatable. The best team Dallas has faced this season is the New York Giants, who gave them their only loss, and currently, hold a record of 7-3. The Dallas-based team has a winning record against teams playing under .500 and only one win against a team above .500. Nevertheless, it is exciting to see a team approaching the playoffs, first place in their division, with a 9-1 record. The finest game they played all season was against Pittsburgh, which they pulled out a win because of some superb moves from Elliot. The rest of their wins are due to the schedule of teams not exactly playing to their best ability.

The Cowboys did what was needed, by beating the teams they were capable of and holding their own against the teams that were equal to them. They played well and earned their nine consecutive wins. There are six games left in the season including a rematch with the Giants at the Meadowlands stadium. When they played Baltimore, they managed to control the clock and forced their opponent to use their timeouts.

The Cowboys pulled off their ninth consecutive win against a team, which has proven to be one of their toughest opponents. The Ravens could not hold on in Sunday’s game and took a 27-10 loss, against a team they had conquered many times. The momentum is with Dallas for an exciting end to the season