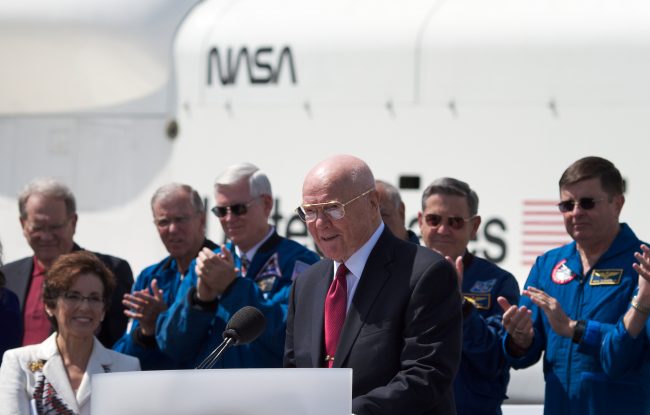 John Glenn passed away on Dec. 8, 2016; he was 95. The Columbus Dispatch announced his death quoting Ohio Gov. John Kasich, “Though he soared deep into space and to the heights of Capitol Hill, his heart never strayed from his steadfast Ohio roots. Godspeed [sic]!”

He had been hospitalized at the Ohio State University (OSU) Wexner Medical Center for the last several days. Glenn’s wife, Annie, and other family members were with him when he died. Reports indicate that he and his wife were married 73 years.

His body will lie in state at the Ohio Statehouse, followed by a public memorial service. The memorial will take place at the OSU Mershon Auditorium. According to The Columbus Dispatch, the dates and time for the public events will be announced once they have been set. Glenn will be buried at the Arlington National Cemetary in a private service.

Glenn’s life was made up of an adventurer’s tale. He broke the transcontinental flight speed record when he was a pilot in the U.S. Marine Corps. NASA recruited him to participate in the testing for the new Manned Space Program in 1958.

He competed against 507 other candidates. Glenn became a member of the first team of NASA astronauts called Mercury Seven. Then in 1962, during the Friendship 7 mission, he became the first American to orbit Earth.

In 1998, at the age of 77, he broke another record by becoming the oldest man in space. Glenn was one of a seven-astronaut crew aboard the space shuttle Discovery.

Serving as an Ohio Senator

Glenn served as a senator between 1974 and 1999; when he retired.  During the 25 years he represented Ohio, he was a chairman of the Committee on Governmental Affairs. He was a member of the Armed Services and Foreign Relations committees.

In a statement released to NBC News, OSU President Michael V. Drake said: “[The] Senator  was a decorated U.S. Marine aviator, legendary NASA astronaut, tireless public servant, and an unparalleled supporter of The John Glenn College of Public Affairs at Ohio State, where he served actively as an adjunct professor until just recently. He was an authentic hero whose courage, integrity, sacrifice, and achievements inspired people, young and old, around the world.”

Further information about his death and public services will be announced as it becomes available.