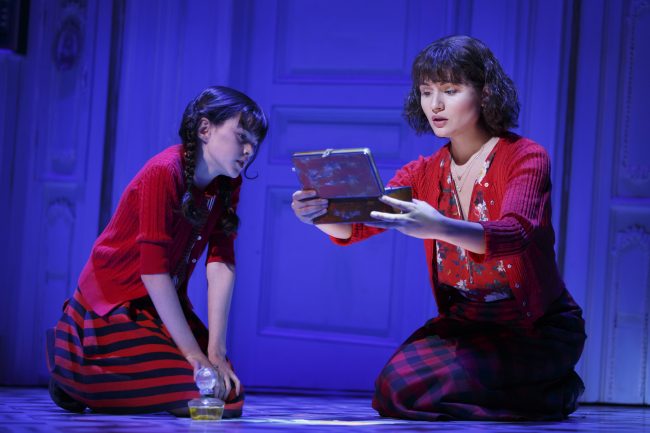 Many charming movies lose something when they move to the stage, particularly as a musical. However, “Amélie,” a quirky 2001 French film-turned-stage musical that opened in Los Angeles Friday night in a Broadway-bound warm-up, is an exception offering a charming respite from holiday hassles.

The stage production of “Amélie, A New Musical” at the Ahmanson Theatre is successful largely because of its cast (and scenic design). Phillipa Soo, most recently Eliza Hamilton in a certain Great White Way blockbuster, is stellar as the titular heroine, as one would expect. The ensemble portraying multiple characters and especially 10-year-old scene-stealer Savvy Crawford, as the younger Amélie, add to the enjoyable diversion.

Amélie Poulain is the eternal optimist. As a homeschooled child, her only friend is her pet goldfish. When she has to give him up and toss him in the Seine, she cheerfully says she is giving him “the world’s biggest bowl.”

After leaving her lonely home life and moving to Paris, she uses her active imagination to remake the world around her Montmartre home. She works as a waitress in The Café des 2 Moulins, surrounded by an eclectic group of staff and regulars.

The gamine heroine spends her time searching for the owner of a time capsule that she finds in her apartment, discussing Renoir’s work with an artist neighbor, encouraging the café crew, and helping others. But, she does not realize that her active imagination and pursuits mask her inability to get close with people. (The point is driven home in the song “Everything is Connected.”)

Besides the title character’s winning personality, seemingly random items from the late 1990s give the show its quirky charm. These include a dream sequence/parody from Princess Diana’s funeral (with Elton John performed by Randy Blair singing “Goodbye, Amélie” and a halo-wearing gospel choir). There are also a world traveler garden gnome (“Rio is Brazilliant”), old fashioned photo booths, and ringing pay phones. The bits come off magical here instead of corny. 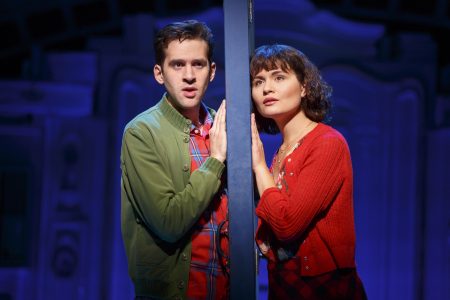 While surrounded by cast members in most scenes, Phillipa Soo’s charming presence makes the show worth seeing. The problem is that one cannot help but want material that takes better advantage of Soo’s soprano. The numbers she sings are somewhat bland and there is no defining, applause-engendering moment. Even “Stay,” a duet with her love interest, Nino (played by Adam Chanler-Berat), is touching, but is no showstopper.

Berat is adequate. However, he comes off as a nice guy, not a fantasy figure that would pull Amélie out of her shell.

The shows music is offbeat, but the show needs a noteworthy ballad or tour de force song. Beside the Elton parody, the best number is one sung by cafe coworkers hypochondriac Georgette (Alyse Alan Louis), grieving Gina (Maria-Christina Oliveras), and circus performer turned boss Suzanne (Harriett D. Foy). The trio present a rousing “Lover for the Ages” that reflects their misfortunes with amour (“jealously and crazy stalking come later” … “love is just another diagnosis”). It gives them a great moment, but Amélie herself and the talented Soo need one.

“Amélie: A New Musical” offers up its charms at the Ahmanson in L.A. until Jan. 15 (and has time to add a great number) before it is Broadway bound next spring. While flawed, the quirky cast and undeniably talented Soo make “Amélie” a nice holiday treat.

Photos of Savvy Crawford and Phillipa Soo (top) and Adam Chanler-Berat with Soo (inside) by Joan Marcus, courtesy of Center Theatre Group/Ahmanson Theatre