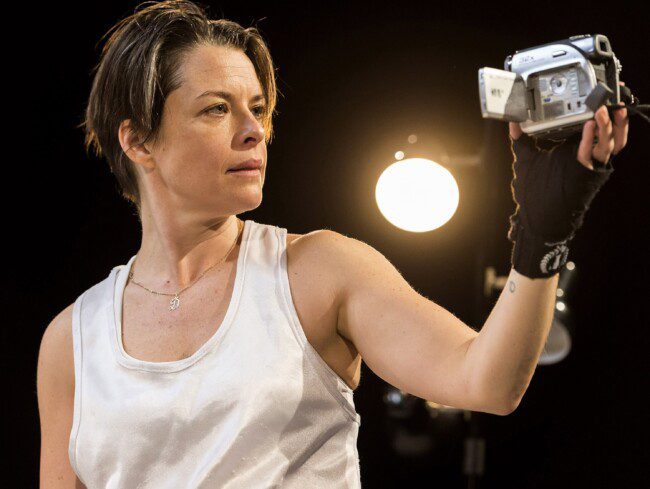 “The Wholehearted,” the play that opened Sunday at the Kirk Douglas Theatre, features a gripping portrait of a female boxer who reached the top and knows down is the only perspective left to her. A multimedia experience, the show uses video interviews, songs, physicality and a fabulous performance from Suli Holum to tell a tale of sports heroism, domestic violence, and yearning for one’s more innocent past.

While on the exterior, champion female prizefighter Dee Crosby (Holum), winner of 49 bouts, comes off initially as a clichéd tough girl. The depth and vulnerability readily become apparent as Dee tells (and sings) her tale about fighting back after her husband and trainer, Charlie Flaxon, brutally attacks her.

“The Wholehearted” draws its audience in with an intimate setting comprised of a boxing ring-shaped platform stage surrounded by rows of seats on all four sides. Video screens overhead project close ups of Crosby’s sweat, tears, and blood as she spars with various props onstage and wardrobe changes as the story strips down. Collaborative partners and co-directors Deborah Stein and Holum developed this unusual evening at the theatre.

Dee was 17 when she met Charlie, 26 years her senior. He seduced her with the promise that he could make her into something. He trained her and they hit the big time, including a lavish Florida home purchased with her winnings. However, as Dee says in hindsight, “You never know what’s going on behind someone else’s front door.”

Her ambition was the siren song that lured Dee from a nascent romantic relationship with Carmen. With honesty and regret, Dee tells her story to Carmen during “The Wholehearted.” She feels bad about the way she left (sans note). Now Crosby is eager, with Charlie getting out of jail for the attack on her, to recapture those days and her lost love. However, Dee assures Carmen that she has plans for Charlie so no one can say, “One of the strongest women in the world didn’t go down without a fight.”

“The Wholehearted” tells of Dee’s triumphs and gripping miseries, but ultimately the play is a triumph for Holum. She is brooding, explosive, and entirely plausible in her portrayal of Dee as a boxer. Holum is confident, strutting with a cocky grin and her glove held high or delivering a whirlwind of jabs. The actress is tender caressing a red silk chemise she bought for Carmen. By contrast, she is effectively creepy in a scene where she dons a flowered western shirt, cowboy boots, shades, and slicked-back Elvis hair to sing a creepy song about a beautiful girl.

The pervasive use of video in “The Wholehearted” is skillful. It alternates from taped interview segments for ESPN, a silent cameraman recording live action at the stage side, and selfie confessional bits with a small hand-held camera. While the gimmick could be distracting, it adds depth and texture to the tale as used here.

Center Theatre Group in association with La Jolla Playhouse presents the gripping play, “The Wholehearted,” at the Kirk Douglas Theatre in Culver City, Calif. The Los Angeles-area short run ends Dec. 11. The show will then move to the La Jolla Playhouse north of San Diego, Calif., with performances Dec. 14-18.

Photos of Suli Holum in “The Wholehearted” by Craig Schwartz. courtesy of Center Theatre Group

One Response to "A ‘Wholehearted’ Gripping Play"