A House Divided – Apple Vs Android

By Cherese Jackson on September 15, 2018Comments Off on A House Divided – Apple Vs Android 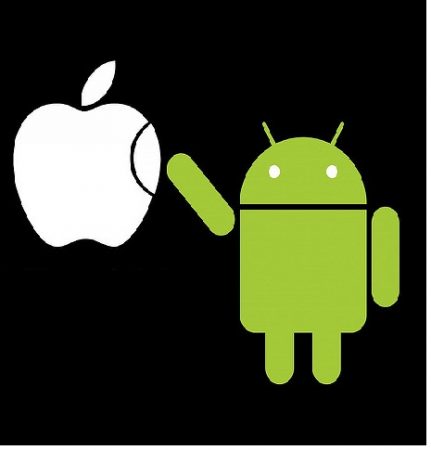 I live in a house divided with my husband. It is a storm I saw coming many years ago. There were hints of a time to come where we would go our separate ways. Our ideals, preferences, and even expectations seem to be misaligned. Last week, as Apple announced its newest line of products to hit the market, it became even clearer; he was choosing to leave the Android world to chase the lofty dream of Apple.

I saw rumblings of my husband’s impending desertion often when we would connect with friends. Most of which are iPhone users. I watched his eyes as we compared the camera quality, battery life and the plethora of applications available via iTunes. It was subtle – first, a “wow” here and then, a “gasp” there. On the drive home, he would go on and on. I could see it in his eyes, Early, my husband was about to abandon the ship.

For context, Early and I started out nearly 13 years ago as Blackberry owners. It was pure bliss. Minimum design, business-friendly and the emails had top-notch security. Model after model, we switched every couple of years. Blackberry even created a touchscreen handset when that technology came along. Then, we made the Android exchange and proudly pushed forward.

However, this year a client gifted my husband an older iPhone and things swiftly changed. He was Team Apple almost immediately! In fact, he has not looked back. And of course, he leads every phone conversation with, “You need to just break down and get the iPhone too.” Little does he know, I could not care less about Facetime and all the applications I would ever need are available in my Google App Store.

Earlier this week, Tim Cook, Apple’s CEO took the stage in Cupertino California to let the world know what Apple has up its sleeve. For years consumers around the globe have huddled near a computer to watch firsthand what could be expected from the tech giant in the near future. First with the master himself, Steve Jobs and now the mantle has fallen to Cook. Sleek, power packed and usually filled with surprises, consumers would be blown away. The hype always reaches unbelievable levels and Wednesday was no different.

Cook spent a long time talking about the iOS and how many people use it before transitioning to the Apple Watch. It is 30 percent bigger in screen size than its predecessor, has curved edges and brings eight complications, so users can watch notifications in a simpler way. He then went on to describe three new health features for the Apple Watch, that I have to admit are impressive.

Finally, Cook shifted the speech to the revolutionary iPhoneX and FaceID, which, according to the CEO, registered an impressive 98 percent customer satisfaction. It was not long before he had listeners salivating as he shared information for the new iPhoneX models – the iPhone Xr and, the star, iPhoneXs Max.

The company seems to have focused a great deal of energy on the Apple Watch Series 4 and the much-awaited new iPhone X s models. In true Apple fashion, Cook shared some pretty exciting and remarkable upgrades and additions for those who are already a part of the esteemed Apple family and rolled out the red carpet to entice new fans.

All of it served to widen the divide my husband and I now face in the world of smartphones. In essence, they are both very similar. They have also borrowed a lot from each other down the years – issues that used to differentiate Android from the iPhone. The big advantage of Android in terms of hardware is that are so many different phones to pick from as with the iPhone and iOS, there is basically, the iPhone.

You can find most big-name apps on both Android and the iPhone nowadays and although there are some, there are not many major bits of software that only run on one platform and not the other. Moral of the story is the choice to ride the Apple wave or rock out with the world of Android is all about preference. Whenever two people are attempting to merge worlds, there will always be reasons for some type of division The challenge is to allow each other the freedom to be true to their individual choices, while yet strengthening the many opportunities for a unified life.

As a coach, both my husband, Early, and I have walked many couples through tough seasons, transitions and helped to navigate a separation. The reality is separation will manifest in scores of ways. Whether new jobs, life-altering changes and apparently choices in electronic devices. Of course, we are not really at odds about this. I am fine with utilizing what’s best for me and besides, I have always found a certain joy in going against what everyone says I should do! But we have surpassed this crossroad. He is now “totally” team Apple. You should see his eyes light up when he is connecting with other “know it all” iPhone users. As for me, I am currently upgrading to a newer device. Apple was never and is still not on my radar. I feel I have landed on the best option. For me, that is.