By John Federico on September 18, 2018Comments Off on Gas Explosions Light the Autumn Skies North of Boston 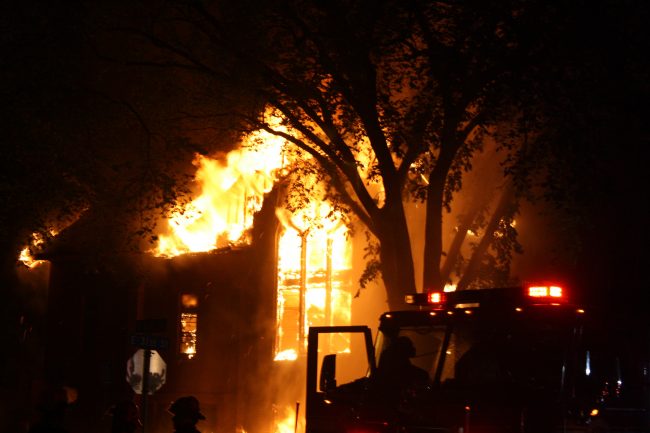 On an early autumn night, fire lit up the skies in Merrimack Valley, Massachusetts. The infernos raged across the communities north of Boston on Sept. 12, 2018.

The preliminary estimate of homes that caught fire in Lawrence, Andover, and North Andover was 60-100, according to Methuen Police Chief Joseph Soloman.

The city of Methuen sent emergency officials to assist residents in the targeted areas. Fortunately, there were no fires in Methuen.

In a Tweet, the Massachusetts State Police (MSP) reported that roughly 70 structures were affected by fires, explosions, and investigations of a gas odor.

They further tweeted that residents in the three municipalities should immediately abandon their homes if they had not already evacuated the area. Additionally, they advised any home or building served by Columbia Gas of Massachusetts should also promptly evacuate.

Amtrak canceled four of its routes between Boston and Maine due to the explosions and emergency response.

Since spark fires were a concern, National Grid cut power to the city and two neighboring towns with the intent of lessening the number of incidences. At least 18,000 customers were without electricity.

Earlier in the day, Columbia Gas announced it was working to upgrade its natural gas lines in Massachusetts, “with a focus on enhanced safety features,” according to CNN. The neighborhood projects included Andover, North Andover, and Lawrence.

Methuen Police Chief said that Lawrence there were so many homes on fire that it was impossible to see the sky. He estimated there were 20 to 25 homes burned in Lawrence alone.

In Andover, firefighters responded to and extinguished 35 fires. Eighteen of those burned at the same time.

The Essex County District Attorney’s office said that Leonel Rondon, 18, died in Lawrence when a chimney fell onto his car. Several others were injured and numerous businesses and homes perished in the aftermath of the explosions.

Chelsea is an inner-city suburban city that is just to the north of Boston, which is the hub of Eastern Massachusetts. In 1973, Chelsea burned down for a second time in the 20th century. The First Great Chelsea Fire occurred in 1908.

The site of both infernos was called the Rag Shop District. The neighborhood earned its name from the numerous junk dealership business that adorned that radius.

Right before the second fire, the district had been planned to be razed. In the early 1970s, many of the junk dealerships closed down due to the local economic recession. As a result, many buildings were abandoned, which were primarily wood and brick construction.

In the gritty Massachusetts city, a fire alarm was sounded at Third and Arlington St on Sunday, Oct. 14, 1973, at 3:56 p.m.  The fire quickly spread from Summer Street to Maple and Third Streets. Like an unstoppable rebel force, the blaze spread as the winds were rushing to a speed up to 35 mph.

The aftermath was devastating. On Monday, commuters were turned away from entering Chelsea after the National Guard shut down the Meridian Street drawbridge in East Boston.

By John A. Federico
Edited by Cathy Milne