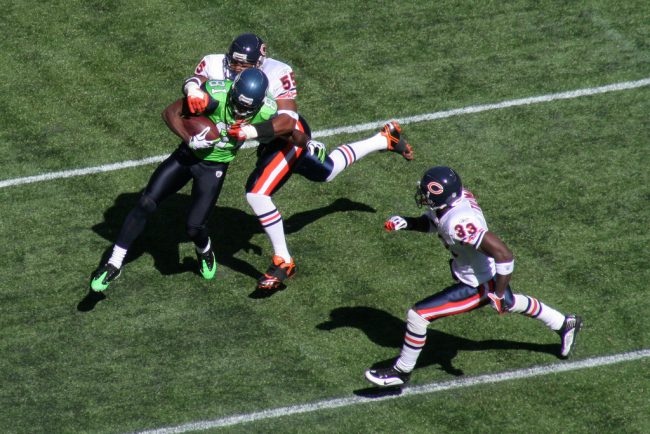 The Chicago Bears at halftime were tied 6 points each in their home game against the Las Angeles Rams.

But at the moment the score is now the Rams 6 the Bears 15.

So far the Bears have intercepted the Rams on two occasions in this defensive brawl.

Who would have known that the Bears and the Rams would finish the first half of the game with a total of only 12 points scored?

According to gameday experts, the Chicago Bears are playing their second big test of the season as they face the number 2 offense in professional football.

The Bears, coming off their fourth loss of the season last Sunday against the New York Giants, are arguably better prepared to compete with their second year starting quarterback, Mitchell Trubisky’s return to the starting lineup.

Trubisky was the Chicago Bears’ No. 2 overall draft pick in 2017. In his first year as a Bear, Trubisky held the third-highest pass rating from among 29 quarterbacks. The rookie Bear completed the 2017 season with seven touchdown passes, seven interceptions in 12 starts. He was the quarterback on record, winning 4 and losing 8 games.

This year, Trubisky has already thrown 20 touchdown pass after starting 10 games for the Bears this season. He has also rushed for more than 350 years with 3 rushing touchdowns.

The Chicago Bears appear to stack up well against the Los Angeles Rams. Bear running back Tarik Cohen’s 156 receiving yards against the Giants in week 13 were the most in a game by a Chicago running back since 1960. Cohen joined Jerry Rice as the only player in National Football League history with a touchdown, 12 catches and at least 150 yards in the same game.

Jordan Howard is also having a good second half of the season as he has been called upon more often while Trubisky was sidelined for two weeks.

On defense, it is not a surprise that Khalil Mack is having another great season. However, what makes the Bears defense extra special this season is the play of Eddie Jackson who had his sixth interception against the Detroit Lions in Week 11. In fact, Jackson has more defensive touchdowns over any player since the 2015 NFL season.

Chicago Bear defensive end Akiem Jamar Hicks has also contributed to the team’s second-best defensive record as he recorded a career-best five tackles for a loss against the Giants last Sunday.

The Rams, however, have answers to the talent that the Chicago Bears puts on the field.

Los Angeles starting quarterback Jared Goff has passed for more than 3,700 yards with 27 touchdowns and only 7 interceptions. Along with Goff, the Rams feature running back Todd Gurley who leads the NFL in rushing yards. Gurley has racked up 1,175 yards and has scored 7 touchdowns.

On defense, the Rams feature defensive lineman Aaron Donald. The 6-1, 280-pound rusher has been almost unblockable. Donald leads the league with 16.5 sacks on the season. He is clearly a game changer and the Bears have to beware of his extreme quickness and disruptive abilities.