By Cathy Milne-Ware on December 5, 2018Comments Off on Living With Opioid Addiction 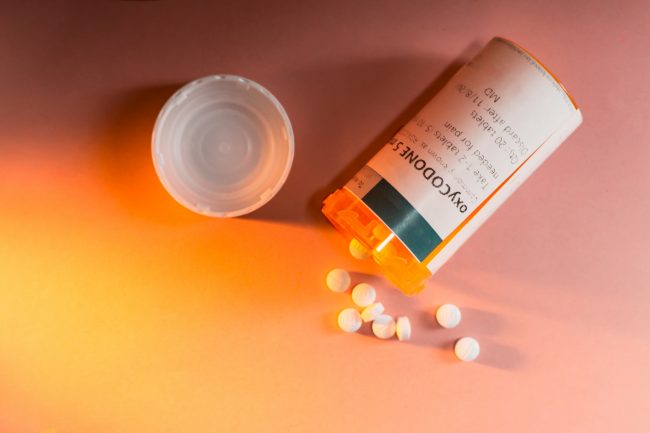 Opioid addiction is rampant in the United States. One of the reasons for the epidemic is older adults are told they are no longer a good candidate for narcotic pain prescriptions. In support groups, seniors tell stories of no longer being able to obtain their medication legally so they turned to illegal means of obtaining the drug. It can, and does happen to anyone. It happened to me.

My pain doctor threw my life into chaos. My appointments at their office were always tedious. Every month I was given a urine analysis, we reviewed my pain diary, and had a general discussion about how life is going. Usually, the entire visit is handled by one of the physician’s assistants.

But not this visit, the doctor came in to talk. He started with, “You must quit using Oxycodone and Fentynal because we do not know how long-term use of narcotics affects seniors,” I was stunned. Panic began to dominate my life. How was I going to deal with my chronic pain?

My pain started when at 11 years old juvenile arthritis attacked my body; knees first. Back in 1969, the medical complex did not yet recognize that activity was the best way to handle the associated stiffness with the disease. Being an athlete, and being told not to participate was a blow to my mental and physical wellbeing.

I found a way to exercise without my pain being overwhelming. Exercising in water greatly reduced the pressure on my knees. When attending water wellness classes at the local community center the majority students were 60 years or older. They could not comprehend why a child had so much pain. I often heard, “Just wait until you are older, then you’ll know what real pain is.”

At the time the only pain medication used for the arthritis was aspirin. Over-the-counter Indomethacin and ibuprofen were not yet available for purchase. Within a year, several stomach ulcers developed, the result of which was discontinuation of aspirin. The first controlled substance prescribed was codeine; a naturally occurring alkaloid of opium.

Between 1970 and 1997, I took a number of prescribed narcotics and opioid derivatives, many of which are no longer on the market. When the pills were not enough so I added alcohol, which helped. Between the medication-induced sedation and the related inactivity, in addition to the substantial caloric intake from alcohol, weight gain was inevitable.

Excessive pounds destroyed the cartilage in arthritic joints. Moreover, CNA duties such as lifting patients repeatedly throughout the day increased the need for pain management. It was a burden trying to work and use narcotics.

The decision about quitting work finally came but it was not made willingly. In the spring of 1998, I was walking with a patient, she was using a walker and I had a gait belt attached around her waist to help if she became unbalanced.

She had a mini-stroke, her speech slurred, and then she stumbled. Because I was distracted by the stroke symptoms, we both fell. She suffered a hip fracture and my left kneecap was severely damaged putting me in a wheelchair for the next two years.

Thus began my first encounter with an opioid. Vicodin®, which contains acetaminophen and hydrocodone, was prescribed. By the fall of 1999, I was taking more than allowed. I purchased additional pills off of a friend. Addiction increased the need and seemed to increase the pain level. Finally, a referral to a pain specialist happened.

The first narcotic he gave me was a liquid form of morphine. In order to prevent the typical spikes of high and low, it was taken every 6 hours around the clock. The regimentation became the focus of my life. By then pain drugs had ruled for 30 years.

As the pain management field matured, more specialists and drug companies sought referrals from general practitioners. Soon, the industry was booming. The manufacturers flooded the market with Oxycodone, Fentanyl, and other highly addictive narcotics.

When offered time-released medication, I jumped at the chance. The doctor gave me 10 milligrams of Oxycodone 6 times a day, and Fentanyl transdermal patches, which dispersed 200 micrograms per hour for 72 hours. Finally, the pain did not control my life! The wheelchair gave way to a walker and physical therapy. From 1999 to 2012 the dosages varied.

My life was going along fine, the doctor was accommodating. Even with the negative side effects like thinning hair and nails, as well as gastric issues, I felt positive about my future.

That was until the day he came into the exam room and overturned my life. I tarried with my decision to voluntarily withdraw from the opioids. For two months I fought the idea tooth and nail. After all, I was not a senior at the tender age of 54.

Stealing and lying became a way of life. No one was immune from theft as I pilfered a pill or two at a time from friends and family members. I accidentally, on purpose, lost a filled prescription. I started taking the Oxy every 8 hours and increased the patch to 84 hours to maximize my stash. I bought Oxycodone off of friends of friends.

After those two months of arguing with the doctor, he gave an ultimatum. Either I accepted his offer to help me wean off of the opioids or he would not write another prescription. Even more panicked, I agreed.

It would take 18 months to completely withdraw under the doctor’s guidance. The book “Manage Your Pain Before it Manages You” and its accompanying workbook were mandatory. Certain my pain levels would force me to buy drugs off of the streets, I continued stealing and hoarding my drugs. I never returned to his office for my final appointment after he gave me my last prescription.

Fortunately, before my stash was depleted recreational marijuana became available in Oregon. I found some edibles and cannabis strains that work to keep my pain under control. That worked until I fell and damaged my wrist in 2017 and had surgery the following April when Oxycodone was prescribed again. However, instead of having a 30 day supply it was 10 and I had to beg for more. Once again addiction became part of my life. After 10 months, quitting cold turkey was more than horrendous.

In September 2018, I injured my wrist again, this time a tendon tear. Fearing addiction again, I turned down the offered Oxycodone. Frankly, it astounds me with the opioid epidemic in the United States that the doctors are still pedaling these drugs.