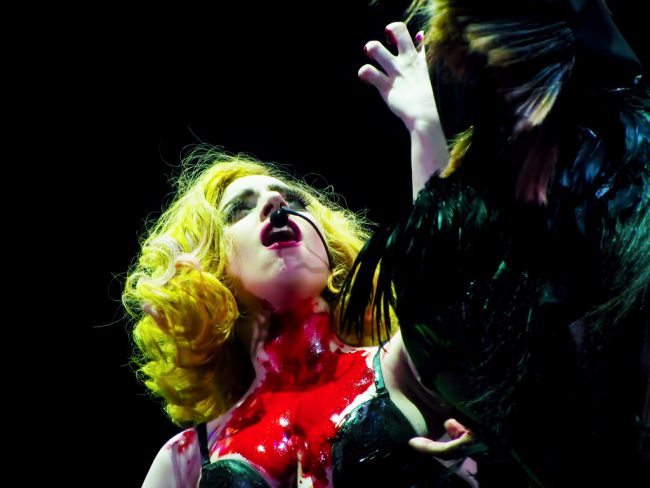 33-year-old Stefani Joanne Angelina Germanotta otherwise known as Lady Gaga first hit the music scene in the early 2000s, and she has not looked back. Like any artist, she has had her highs and lows in her career.

This was the song the world was introduced to sound Gaga reinvigorated the music scene with. The single was 2009’s best selling single, praised by critics, won Grammy awards, went number one around the world, and by selling over 14 million copies, is one of the all-time best-selling singles.

Gaga uses autotune on purpose to highlight the electro-pop sound, rather than to hide weak vocals. The song combines a dark, robotic sound filled with synth-pop and is one of the 2000s most iconic songs.

The lyrics are about Gaga’s bisexuality. She told Barbara Walters in an interview that is what the song was about, how she was with her boyfriend thinking about a woman.

“Perfect Illusion” is the lead single from “Joanne.” The single has a synth-rock flavor with Gaga’s vocals highlighted. The song has a sense of disorientation and urgency which builds to the march-like chord progression. At the 2:00-minute point in the song there is a dramatic key change with bashing drums as Gaga wails “it wasn’t love.”

“Judas” was top 10 in 15 countries and was what many think as the true lead single of the classic “Born This Way.” “Judas” in one of the singers most unparalleled and provocative pop songs showcasing her knack for putting together goth avant-garde into a mainstream radio smash.

The song features a sledgehammer beat with a satanic flavor and electro-house. The chorus is 80s pop. The best breakdown in a song and possibly in Gaga’s career happens with the techno breakdown when Gaga throws herself into spoken word.

The Catholic Church criticized “Judas.” Gaga released the song a little before Easter with the music video to exacerbate the controversy.

“Born This Way” was the 1000 song to hit number 1 on Billboard, and will always have the place in history to be a gay anthem. Gaga has always openly admitted she is bisexual, and she sang it in the Super Bowl halftime show in 2017 to send a message to Donald Trump.

Madonna claimed Gaga ripped the single off from her song “Express Yourself.”

The euro-dance anthem was beloved by Gaga’s fanbase and quickly became a favorite. SchieBe translated from German as “S**t.” Gaga speaks with a German accent as well as English with synths and bass. The track received praise from the critics.

The lyrics are about female empowerment and how issues which happen in life makes a person stronger.

Gaga experienced a significant hip injury when recording this song. She continued the complicated choreography. Her screams during the video were thought to be a repeat of the howl she gives at the beginning of the song.

The song is quintessential Gaga including daring songwriting, risqué performance art, and awe-inspiring aesthetics. “Bad Romance” mixes the electro-pop signature sound with a beat similar to Depeche Mode. The song received worldwide critical praise, numerous Grammy Awards, and by selling 12 million copies worldwide is one of the best selling singles ever.

The video for the song was as important as the single itself. Billboard critics voted it as one of the greatest videos of the 21st century and on YouTube was the most viewed. It also received the most VMA nominations in the history of the award.

Lady Gaga wrote this rock ballad with eerie orchestral tones for the documentary on Netflix “The Hunting Ground.” The movie discusses how common sexual assault on college campuses is. “Til It Happens to You” puts the listener of the song in the position of the victim and helps them recognize the trauma sexual assault causes. Lady Gaga’s sone was nominated for Academy Awards and Grammy and won an Emmy.

The song begins with a sombre piano and soaring strings. Gaga’s incredible vocals sound vulnerable. Her emotional and operatic delivery of the song commands it and cause it to sound even more heart-wrenching.

It is reported that Gaga had difficulty with the recording, as this brought up feelings about the sexual abuse that happened to her.

Diane Warren, the co-writer said that recording the song was very emotional for Gaga, and there were times she could not talk through the song.

In an interview with Variety, Gaga said that she felt that the song enables women or men as say “Do you think you can hurt me? You do not know what power is.” She added, “Because even after all the things you did to me, you do not know how strong it made me.”

Lady Gaga’s record “Joanne” was recorded as a tribute to her aunt who died when she was 19 years old. The album is a fusion of indie-rock, blues, country, and pop. “Diamond Heart” evolves from the introduction with has an electric piano 70s sound going into indie-rock with roaring drums and blues guitars. The song has an underground sound until one hears the chorus when Gaga unleashes rockabilly vocals.

“Paparazzi was the fifth single from Gaga’s debut album “Paparazzi.” The song featured synthesizers which were UFO-like, techno, with an electro-synth groove. “Paparazzi was a huge hit in the summer and was certified in the US 3x platinum. “Paparazzi” with its sultry synth sound and chorus which is contagious, it still feels fresh and innovative ten years after it was released.

In an interview with About.com Gaga said the song had several meanings. She said it is about wooing the paparazzi to have them fall in love with her, the whoring of the media.

“Alejandro” draws from disco and euro-pop, and it has been compared to ABBA.

The song opens with Vittoro Monti playing the violin, with a melodramatic sound.

“Alejandro” sees Gaga bid farewell to past lovers over a stomping synth-pop beat, perfectly balanced with classical production. It draws from euro pop and disco, and critics have even likened it to ABBA. ‘Alejandro’ exists in a dimension between banger and ballad, creating a melodramatic masterpiece.

The lead song from “ARTPOP” released in 2013, was “Applause.” The song has 80s nostalgia with glam rock and EDM mixed in. The song has synths, with a dash of techno. “Applause” was certified in the US 3x Platinum and went charted in the top in 17 different countries.

Gaga’s vocals were spectacular. Critics compared her song delivery, singing with authority while maintaining a tone that was disturbing, to that of David Bowie and Talking Heads.