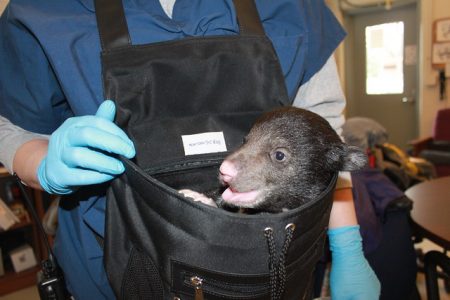 A Paradise a bear cub who was found in March severely burned is doing well at a Lake Tahoe wildlife care center.

Henry Lomeli from the California Department of Fish and Wildlife said the cub who was found alone is most likely a survivor of the California Camp Fire. The baby has severe burns on most of his paws, and he was without his mother.

Lomeli said the cub was stunted in growth, weighing only 15-20 lbs when wardens from Fish and Wildlife found him up in a tree near Yankee Hill. The cub had been living there for several days.

Paradise the bear cub was transported to the Lake Tahoe Wildlife Care Center. It is one of the centers locally which has the capabilities to rehabilitate a bear, said spokesperson and founder of the center Cheryl Millham.

Milham reported that Paradise is doing extremely well, and has put on about 9 pounds.

She added that he loves to eat and eats anything that is put in front of him.

Milham said the bear is hibernating and mostly sleeps and eats. She added, “he is acting like a normal bear.”

Lomeli said the bear cub was in horrible condition when he was found. “he was just hair, bones, and skin, with basically no muscle.” He also thinks he living and surviving by himself since the fire.

He added since he has been with Millham and her care, he is thriving, and his scar tissue is almost healed.

The rehab center will keep the bear cub for about a month and a half. When ready, he will be returned to the Department of Fish and Wildlife.