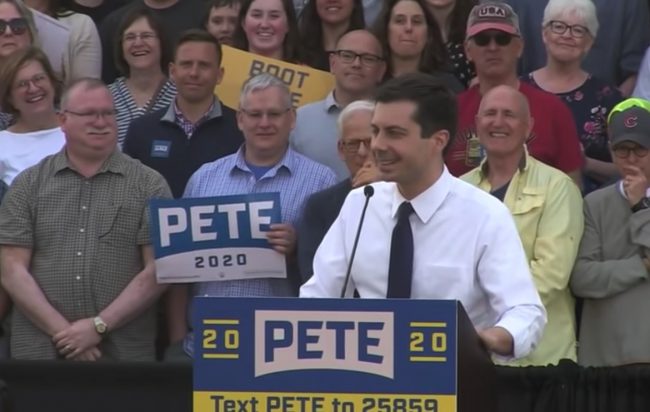 A protester who recently verbally attacked Presidential Democratic Candidate Pete Buttigieg in a campaign rally in Iowa, returned to another event on April 17, 2019.

The protestor yelled anti-gay slurs at Buttigieg and stated a play with two other men who were dressed as Buttigieg, Satan, and Jesus Christ.

The three set up a loud sound system close to a private home of an individual in Marshalltown, Indiana where Buttigieg was participating in a fundraiser for his campaign. Buttigieg is the mayor of South Bend, Indiana.

One man dressed in a crisp white shirt wearing a tie had a sign on him that said “Mayor Pete.” The individual flogged another man who was wearing robes and carried a cross. Another man, dressed as the devil taunted the other two.

The man dressed as Satan said “Every vote for Buttigieg is a lash on Christ’s back. You have betrayed the vows of your baptism.”

The press has identified the man dressed as Satan as Randall Terry, an activist in Operation Rescue, a pro-life group. He is also a religious activist. Terry has been following Buttigieg through his various campaign stops in Iowa.

Buttigieg did not appear bothered and went on talking to the crowd normally.