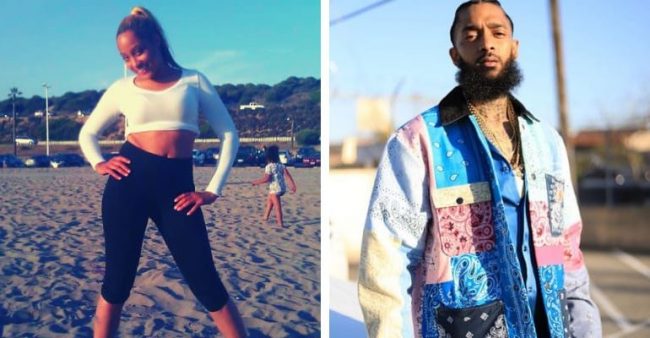 When rapper Nipsey Hussle was gunned down outside his clothing store on March 31, 2019, celebrities posted their tributes.

On April 2, Hussle’s recent girlfriend, and mother of his son Lauren London posted a heartfelt tribute on her Instagram saying she was lost without him.

As of April 4, no comment has been made from the mother of Hussle’s daughter Emani.

Asheghedom, who has both an Instagram and Twitter under the name Chyna Hussle, and Facebook page under the name Tanisha Asghedom have not posted tributes or mention of his death.

Just last month, Hussle proudly went to the Grammy Awards with his daughter and London as his date. He proudly posted pictures of his little girl dressed up in a gown beaming with her father on the red carpet.

The music event was his Asghedom‘s daughter’s first major event she has attended.

Asghedom has stated, despite the fact Hussle is openly dating London for many years (They recently appeared together prior to his death in GQ Magazine, and took a “Couples Quiz”) that she has never broken up with Hussle.

Asghedom tweeted to London at one point he was still in love with her and told a fan that the two have never broken up.

Asghedom has every right to remain silent. One has to wonder what her daughter will think later on in life when she sees her mother not make a small comment about her father at the time of his death.