Taylor Swift’s Single ‘ME!’: All You Need to Know [Spoilers] [Video] 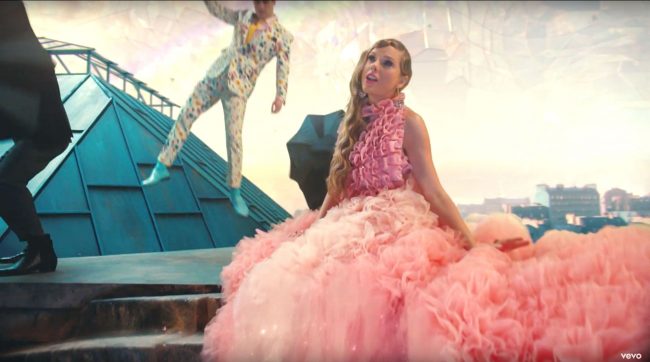 For the past two weeks all over Instagram and Twitter, there was an announcement that Taylor Swift was starting a countdown. The timer counted down to April 16, 2019, at midnight ET.

Fans were more enthralled with the Swift countdown than New Year’s Eve, wondering what was planned.

Swift teased the fans even more by posting on her social media a photo a day. The pop star had a mural commissioned in Nashville teasing the announcement. On April 25, Swift showed up at the mural.

At midnight the surprise was revealed, and it was a new song. Swift dropped her new single and video “ME!” featuring Panic! At the Disco’s Brendon Urie.

The last album from Swift was released in November 2017.

Madonna. This is what a pop song for 2019 is supposed to sound like. “Medellin” sounds as if it came straight from 1989.

If anybody missed the hype around the song, here is everything one needs to know.

Swift’s new song “ME!” is an incredibly joyful, upbeat track which was co-written by Swift, Joel Little, and Urie. This is the first time Swift has worked with New Zealand producer Little who worked with Lorde, Shawn Mendes, and Ellie Goulding.

Why Duet With Urie?

Swift wrote in a live chat on YouTube at the premiere of the video that Urie was one of her favorite artists and she always was thinking about the right song to collaborate with him on. When she was writing “ME!” and got to the chorus, she knew it would be perfect for him.

What Does The Song Mean

There have been many theories on this subject. In 2019 at the NFL Draft, the singer said in an interview with Robin Roberts that “ME!” is about embracing a person’s individuality, owning, and celebrating it. The Grammy Winner also said that when she writes a pop song, she wants the melody to stick in the person’s head, and she wants that melody to make people have a good feeling about themselves.

She told subscribers to Apple Music that “ME!” was a song about having a person think that they are not replaceable. She wanted people to believe that there is only one you.

The sunny, happy, pastel color scheme of the video is very different than the moody, dark introduction to her album in 2017 “Reputation,” which was released after a feud with Kim Kardashian and Kanye West.

In the video, it opens with a white and pink snake hissing as it slithers over a colorful cobblestone pavement.

Kim Kardashian called Swift a snake on her social media, which caused her “reputation” to sink. When Swift was recording “Reputation,” she embraced the symbolism of a snake. In the video for “ME!” the snake transforms suddenly into butterflies. It represents the rebirth of Swift, and she is now a butterfly.

The video opens like a movie which stars Swift and Urie. The couple is fighting French, and Swift admonishes Urie for arguing in the presence of their young daughters, who are the couple’s cats. Cats are a running theme throughout the video. This could be a subliminal message Swift will star in the movie “Cats” opening this year.

The lyrics of the video is about empowerment and individuality “I promise that you will never find another like me.”

The video has a “Mary Poppins” meets “Wizard of Oz” meets “Glee” feeling. In it, Swift rides a unicorn; Urie floats from the sky ala Mary Poppins with an umbrella; backup dancers are carrying briefcases dressed colorfully; and rainbows and hearts.

Swift said on YouTube there are lots of Easter Eggs in the video. Some will be easily spotted, and others will take some time to find. There is also a secret in which Swift will not revel for months.

“ME!” is leading up to the seventh studio album from “Swift.” Her last album “Reputation” was 2018s top album. Swift said fans that the new album will be coming soon.

One Response to "Taylor Swift’s Single ‘ME!’: All You Need to Know [Spoilers] [Video]"