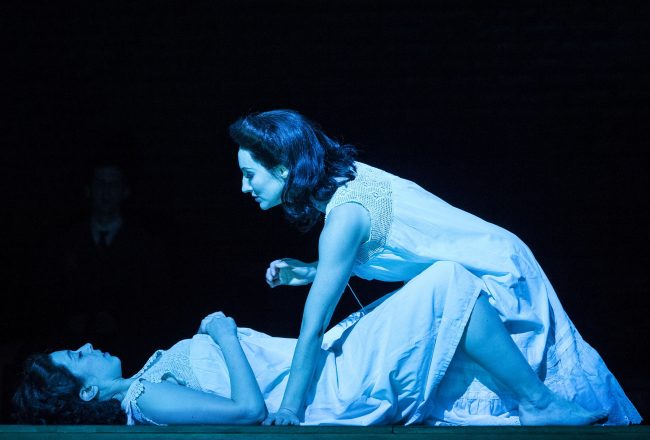 “Indecent,” the Tony Award winning play that shows how little times have changes, opened Sunday, June 9, at the Ahmanson Theatre in Los Angeles shows. Playwright Paula Vogel based the script on the true story of Sholem Asch’s play, “God of Vengeance, ” that pushed boundaries and offered incendiary theatre in the 1920s. While it starts as an ode to Yiddish theater, it evolves and shows reactions to the first lesbian love story to appear on Broadway nearly a century ago.

“Indecent” is a play about a play called “God of Vengeance.” Asch’s work was a hit in Europe and in New York’s Greenwich Village (before heading uptown in 1923). Immediately after the Broadway opening, however, police arrested the cast and producers for indecency. This illustrates how the crowds in Berlin, St. Petersburg, Constantinople, and edgier, heavily immigrant crowds in lower Manhattan were less puritan than the uptown theatregoers.

A Tale of Acceptance Not Accepted

The territory “Indecent” covers in less than two hours, with no intermission, is impressive. Vogel’s play presents the history of Asch’s drama, from its inception in 1906 Poland to various European stages before the Broadway production. Ultimately, she carries us to World War II, where performers offered it in a ghetto attic of Nazi-occupied Poland, and the 1950s McCarthyism. Theatregoers cannot help but be reminded of today’s racial and religious intolerance and Trumped up jingoism.

Besides the lesbian kiss, Asch’s plot touches on false piety. When first sharing his play, he is criticized for making someone Jewish the owner of a whorehouse. (It is that character’s ingénue daughter and one of the whores who fall in love.) Asch asks why every Jew must be a paragon and cannot be viewed as flawed humans. He is advised that his character will pour petrol on the fires of anti-Semitism. That issue is never raised again in the show, even in the Polish ghetto. 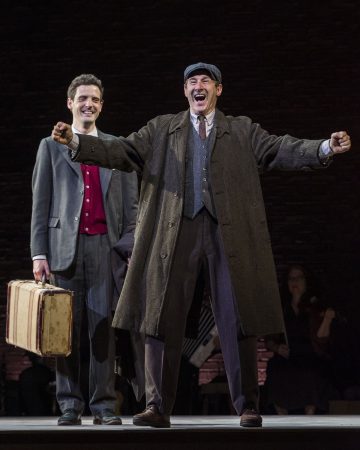 The “Indecent” at the Ahmanson is similar to the Broadway version, with Rebecca Taichman, who won a Tony for directing the NY show, guiding the way. The Los Angeles production features several actors from the original Broadway cast: Mimi Lieber, Steven Rattazzi, Richard Topol, and Adina Verson. New cast members include Elizabeth A. Davis, Joby Early, and Harry Groener. Each actor (other than Lemml, the stage manager, played by Topol) play several roles, which does require close attention but is effective.

Musicians, who are also onstage as part of the ensemble, include Matt Darriau, Lisa Gutkin, and Patrick Farrell. With just a few instruments and Klezmer tones, they enhance the action. Watch for the violin playing behind someone’s back and other playful bits.

The production is full of dreamlike sequences and imagery. “Indecent” commences with the ensemble clad in somber garb that blends into the shadows and literally rising from (and shaking off) the ashes of history and past persecution. The production also effectively uses “blinks in time” to freeze the action and move along time.

“Indecent” offers a very different theater experience as it pushes boundaries with its play within a play, “God of Vengeance.” While slow at first, it picks up and carries the audience along with it. “Indecent” will be at the Ahmanson through July 7, 2017.