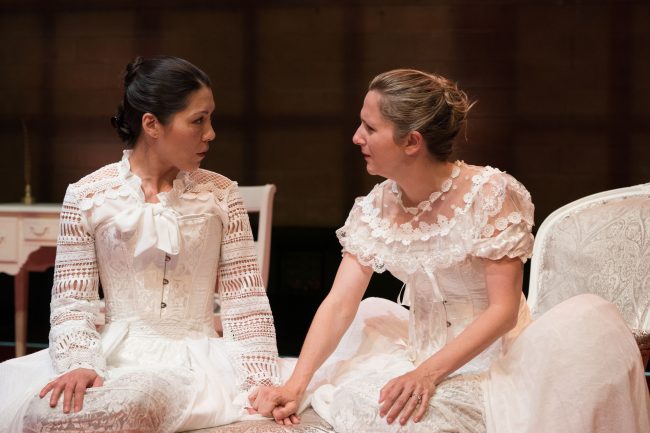 Almost 100 years after women got the vote, a new play, “Ladies,” that opened in Pasadena, Calif., this week reminds audiences that women have struggled to make noise and attract history’s attention for centuries. Making its world premiere at the Boston Court Pasadena, “Ladies” is a fun, fictional account of the actual women in 1750’s London who comprised The Blue Stocking Society, the first major feminist movement.

The play imagines interaction between Elizabeth Montagu (Meghan Andrews), Elizabeth Carter (Carie Kawa), Fanny Burney (Jully Lee), and Angelica Kauffman (Tracey A. Leigh). As Montagu states, she sought to start “a revolution in my parlor” and “be amazing women who make noise.” Think how radical it was in the period before the American Revolution for women to want careers and discuss literature and art in their homes. While the term bluestocking came to mean an intellectual or literary woman, the ladies’ efforts did create a scandal in their day while claiming to not “care for the opinions of others.”

In real life, the quartet of characters in “Ladies” actually represent two generations of women who did more than needlepoint in their parlors and sought to expand their horizons:

An Effort by “Ladies” 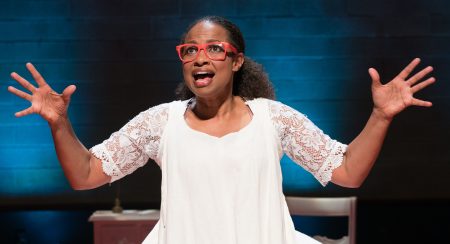 As written by Kit Steinkellner, “Ladies” cleverly juxtaposes the women’s ambitious goals to transform London society with characters talk through a modern lens, by donning bright red glasses to break through the fourth wall. One character humorously explains how the writer learned about the Blue Stockings, Googled these women, read Carter’s poems, did other research, and challenges years of history told by men about men.  Bottom line, she brought them to life and shows how slow change has been.

Jessica Kubzansky directs the appropriately all-female “Ladies” production, from the playwright and cast to the crew and designers. Besides the red glasses, the costume designs by Ann Closs-Farley enable the characters to rapidly switch centuries. Remove the hoop skirts and corsets, modern women appear. At times, some actresses even put on waistcoats to portray men in their lives.

The “Ladies” cast is first-rate, particularly Andrews and Leigh. Andrews has to convey the enthusiasm and frustration. Leigh’s sunny take on Kauffman shows her confidence.

“Ladies” will be making noise and offering a little bit of history on the 99-seat main stage of the Boston Court Pasadena in Southern California through June 30. It is worth the time to see how Steinkellner imagined these women finding their way in society long before women sought to do more than look pretty and marry well.