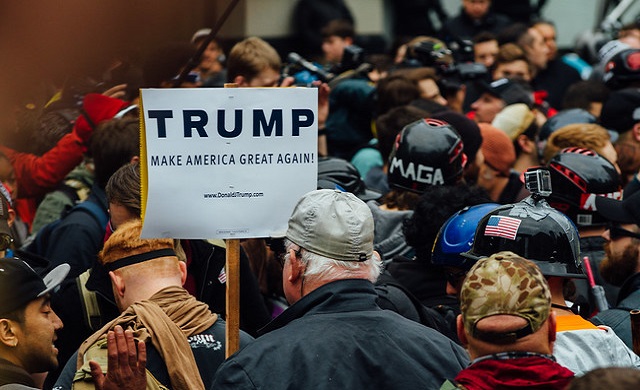 “Make America Great Again” is the slogan that put Donald John Trump into political office. However, from that time until now, Number 45 has cunningly avoided specifying when America was great, nor has he said what made it great. There is really no need for him to do so.  Not when his cynical dog-whistles recall those halcyon mid-twentieth century days when blacks were kept in the back of the bus, gays were kept in the closet, and women were kept pregnant and in the kitchen.

Some manipulators strive to rewrite history. Others glaze over it or simply ignore “yesterday” altogether. Either way, the more historical truths are distorted or ignored, the more imperiled the future of America becomes. Songwriter, Frank Turner, wrote the following words as the chorus to his song with a title that mirrors the slogan:

Trump wants to make America great again, but great like when? This simple question presents a challenge to many citizens. When WAS America great? Was it the 50s? Well, no, segregation was rampant then. Was it the 1800s? Sure, except for the whole slavery thing. Turns out, this idea of “making America great again” was built on a shaky foundation. When speaking of this slogan, Associate Director of Diversity & Inclusion at the Coretta Scott King Center at Antioch College, John Paul Robinson penned the following:

Make America great again? The same America that stole this land and committed genocide against the Natives/Indigenous people of the Americas, and now has the audacity to build a wall to keep the bloodline and kinfolk of the Native/Indigenous from their original land? Or do you mean the America that allowed white supremacist to enslave, rape, and kill African/Black people for their own capitalistic gain, and then created rules and laws to keep the bloodline of those African/Black people and their kinfolk oppressed, uneducated and underpaid? Nah, can’t be that America?

Then you must mean the America that allows police to kill a black man for selling cigarettes on a corner without a permit, but praises the police who buys Burger King to feed a hungry white mass murder? Oh, not that America, then you must be speaking about the America that told women they couldn’t vote, earn equal pay or make their own choices concerning their own bodies? No, not that one?

Then it must be the America that has the knowledge of the high number of missing brown, black, and indigenous girls/women who are being sold into sex trafficking and murdered in America, while our politicians and lawmakers continue to do nothing about it? No? Well is it the America that calls the poor “lazy” for working three jobs at a time? The same poor folk that has three jobs but can barely manage to pay rent, feed their families and afford adequate healthcare.

Can’t be that America, then you must be speaking about the America that allows 18-year-olds to join the military with ease, but can’t find ways to come up with stricter gun safety policies and rules because it ‘infringes us of our freedoms…?’ Shall I continue?

When you speak the words ‘MAKE AMERICA GREAT AGAIN’ and support individuals who use this rhetoric, you degrade the oppressed and uphold/promote the privileged- the majority of whom identifies as White, and it ultimately makes you a contributor to WHITE SUPREMACY!

Please remember that America has a history and pattern of dehumanizing and abusing African/Black, Native/Indigenous, Latina/Hispanic, women, LGBTQ+ folk, non-Christians, and poor people. America has never been great for us, and just because you see us surviving doesn’t mean that we’re thriving.

This most recent phase of the Trump presidency is the most dangerous so far. He has, of course, encouraged violence, or suggested its efficacy, on many occasions in the past. In a recent interview, Trump made it plain that he was sympathetic to those of his supporters who might feel compelled to become violent on his behalf.  The leader of the nation said:

Number 45 has spoken about the press in such a way as to possibly stimulate thoughts of violence among his more fervent adherents. However, it seems his rhetoric has become particularly sweeping. Brown people, in general, have become his targets. There is no reason to hope that he will reform. His followers reward his radicalism, and his handlers are among the most cynical figures in American political history.

Make America great again sounds like sweet music to ignorant and privileged citizens. Our past is tainted in disgust, encumbered by marked graves of those considered people and those unmarked graves considered property. Our past is debased by indifferently sending our young men and women to die in countless wars. Our past is murder, torture, Jim Crow, internment, slavery, incarceration, McCarthyism, discrimination—the list goes on. The inability to see America’s past is descriptive of being blindly supportive of a meager institution into which we were indoctrinated by saying the pledge of allegiance at a young age.

This blind patriotism can make people passionate about things that they may not necessarily even understand. For instance, kids learn to say the pledge of allegiance every day before they even learn American history. This action essentially forces people to give an oath to something they have no idea about.

Why is sitting down or kneeling during the national anthem controversial?  Extremists mandate it because “all of us should love and support our country.” As citizens of this nation, no one has to love and support this country.  In fact, the First Amendment right confirms this. Many may appreciate and acknowledge the existence of this country’s constitution and laws, but by no means people support a country when it chooses to send people to die in wars, allow racism a seat in the highest position of the land, unnecessarily kick people out, throw children in cages or treat black and brown citizens unjustly.

Making America great takes more than a slogan. It takes action, including rebellion and activism, to create a new normal. Patriotism for America is great, but patriotism, nor prayer, alone will ever make our country great.

John Paul Robinson: Disrupter and Activist
The Crimson White: America is not great, and never has been