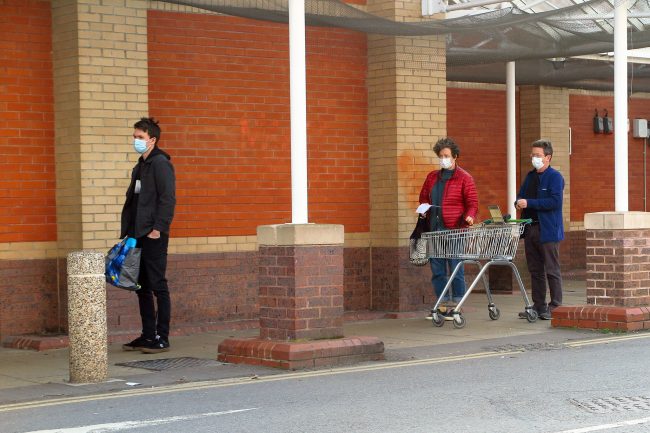 Instacart employees nationwide planned at a strike on Monday, March 30, 2020. They demanded higher safety measures to protect themselves from the coronavirus pandemic.

Instacart employees are known as “shoppers,” because they pick up and deliver groceries to customers. They stated that they refuse to take any new orders during the walkout.

According to CNBC, employees at the Amazon warehouse on Staten Island are also planning to cease work on Monday afternoon. They are protesting over concerns about more protection from the coronavirus.

Amazon gave a statement to CNBC that said the company was “following all guidelines from local health officials and are taking extreme measures to ensure the safety of employees at our site.”

Thousands of people across the United States are sheltering in place to help prevent the spread of the coronavirus as these strikes are being put into place.

There has been a boom in the popularity of grocery delivery services like Instacart since the shutdowns have been ordered. Last week, Instacart made the announcement that they would be hiring another 300,000 workers throughout the United States to meet the demand due to the coronavirus shutdowns.

However, workers stated that they are putting their own health at risk.

The group is demanding Instacart provide protective equipment for workers for free, add $5 hazard pay to all orders to compensate shoppers, and extend sick benefits for those directly impacted by the coronavirus, with a later deadline to apply for the benefits.

On Sunday, Instacart responded to the cries of its workers. They announced that they would be providing in-house hand sanitizer and would change the default tip settings. Now, tips will default to a customer’s last tip for future orders instead of using the normal five percent, according to Instacart.

“Over the last month, our team has had an unwavering commitment to prioritize the health and safety of the entire Instacart community,” stated Instacart president Nilam Ganenthiran.

Gig Workers Collective called the offer from Instacart a “sick joke.”They say the tip changes would “provide no meaningful benefit to shoppers.”

“We are heartened by the outpouring of support we’ve received from Instacat customers, politicians, activists, and everyday folks worried that they could be exposed to the virus due to Instacarts’ craven profit-seeking. The strike is still on. Stay safe everyone.” Gig Workers Collective reported on Sunday.

Monday’s planned walkout caused Instacart to gain support on social media, including that of Democratic presidential candidate Sen. Bernie Sanders, who sided with the workers in a tweet he published on Sunday.

“A company of this size should not be forcing its workers to put themselves – and us all – at risk.”

Vanessa Bain #GeneralStrike tweeted, “Shoppers have had enough. Instacart has refused to act proactively in the interests of its Shoppers, customers, and public health, so we are forced to take matters into our own hands.”

According to the workers’ Medium post, “Instacart has turned this pandemic into a PR campaign, portraying itself the hero of families that are sheltered-in-place, isolated, or quarantined. Instacart has still not provided them from becoming carriers, falling ill themselves, or worse.”

Instacart emailed a statement to FOX Business saying it is “focused on the health and safety of shoppers, customers, and employees.”

Our goal is to offer a safe and flexible earnings opportunity to shoppers, while also proactively taking the appropriate precautionary measures to operate safely. We want to underscore that we absolutely respect the rights of shoppers to provide us feedback and voice their concerns. It’s a valuable way for us to continuously make improvements to the shopper experience, and we’re committed to supporting this important community during the critical time, stated Instacart.

Previously, Instacart said it would pay shoppers for up to 14 days if they were diagnosed with the coronavirus, put in mandatory isolation, or quarantined by local or state officials. However, shoppers were only eligible for those benefits until April 8, according to the post in the Medium.

Instacart employees requested an extension of those benefits and an expansion to include employees who are eligible for the benefits to include shoppers with pre=existing conditions.

As we have previously shared, we’re offering up to 14 days od pay for any hourly employee or full-service shopper who is diagnosed with COVID-19 or placed in individual mandatory isolation or quarantine, as directed by a local, state, or public health authority. We are extending this assistance for another 30 days – through May 8, 2020 – to ensure our community continues to be supported during this rapidly evolving situation.

In addition to the extension, Instacraft wrote in its post that it is introducing bonus payments for in-store shoppers, shift leads, and site managers working during this time. “Bonuses will be determined based on the number of hours worked from March 15 through April 15 and will range from $25 to $200, to further support this community…”

Additionally, Instacart stated that it is grateful for all shoppers fo to support families and people in need by delivering groceries and everyday products. They are providing their neighbors and communities with “an essential service, and we are incredibly proud.”

This response, however, is not enough to prevent Instacraft employees from going on strike.

Bain, organizer of the strike, told The Washington Post, “They’re so tragically predictable. Walk-off is still on, this addresses one of our four demands, and it’s the least meaningful because workers can’t actually access the sick pay.”