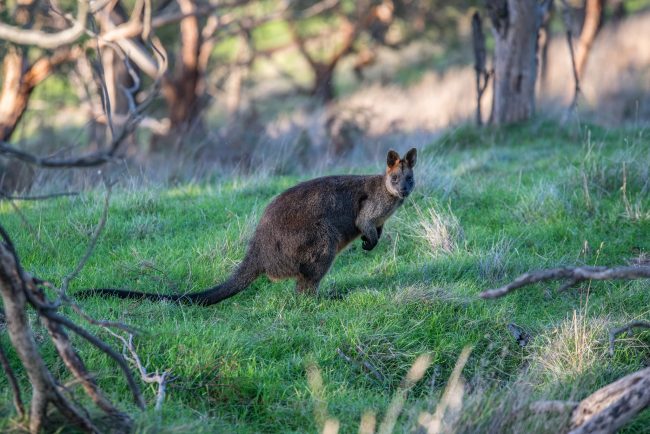 Ever feel like pregnancy lasts forever? Well, for swamp wallabies that is a fact of life. It seems that researchers have recently discovered that this Australian marsupial can actually conceive while still being pregnant.

Swamp wallabies stand roughly two feet tall, and have dark brown fur with lighter rusty coloring on their belly, chest, and at the base of their ears. Their tails are long and black. Due to their coloration and markings, they have been mistaken, at first glance, for panthers. They live in the eastern regions of Australia and are often difficult to see due to the dense cover of the Australian bush.

Their diet mainly consists of grass, leaves, buds, ferns, and shrubs. They have not shown themselves to be territorial, but rather stay solitary. In fact, they have been seen eating alongside other species peacefully. Since they are nocturnal animals, swamp wallabies generally spend the daytime hours resting in the underbrush and in areas with dense vegetation for shelter.

At dusk, they will leave their resting areas to graze in open grasslands. When the wallabies are moving slowly, they appear to have poor coordination, however, when they take long leaps their tails are held horizontal while keeping their heads low.

What Are Their Mating Habits?

Swamp wallabies live polygynous lives, meaning male wallabies mate with several females, however, the females only mate with the one male. Male wallabies savagely compete with each other for the right to mate with females. Usually, these confrontations end with short kicking attacks that define the winner, which is generally the larger of the two males.

These mammals sexually mature around 15 to 18 months old and can breed year-round. Females have the estrus cycle of 31 days, however, the gestation period lasts 33 to 38 days. This fact has made scientists wonder for years if the pregnancies overlapped one another.

To establish if this was the case or not, researchers with Australia’s University of Melbourne and the Leibniz Institute for Zoo and Wildlife Research in Berlin decided to investigate. They collected vaginal smears and conducted high-resolution ultrasounds of pregnant wallabies.

What Does the Data Show?

The data that was collected shed an interesting light on the reproductive activity of the marsupials. They found that 90 percent of the pregnant females were in fact doubly pregnant. Fertilization of the second embryo occurred from ovulation that happens when the fetus is almost complete in its gestation.

What is even more shocking is the fact that the two pregnancies did not share a womb. Female swamp wallabies have two uteri (they also have three vaginas), this allows them to be days away from delivering, ovulate and conceive once again.

The newly fertilized embryo stays in a paused like state until the joey (baby wallabies) finishes the lactation and finally leaves their mother’s pouch. This means that the females are perpetually pregnant.

The only other animal ever known to be able to become pregnant while already being pregnant is the European brown hare. However, unlike the swamp wallabies, the brown hare have distinct breeding seasons and are not pregnant most of their adult lives.

What Are Scientists Hoping to Learn From This?

Scientists are hoping to eventually figure out how the second embryo stays in the paused like state within the swamp wallabies. Some feel that this may lead to a breakthrough in regards to in vitro fertilization. David Gardner, a researcher who works with the University of Melbourne, said, “ This could resolve this complex process (in vitro fertilization), we may not have to cryopreserve embryos, but rather keep them in stasis (period or state of inactivity) within the laboratory.” Perhaps new technology will develop from researching swamp wallabies.