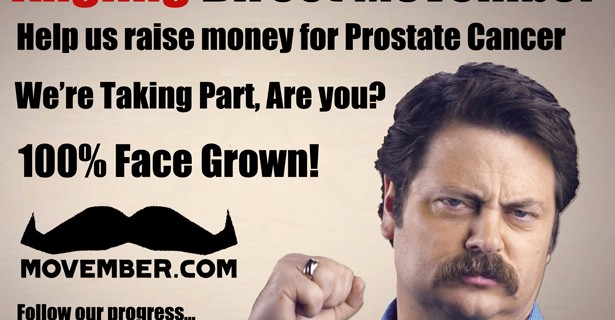 In the past November meant food, it was known for getting families together and enjoying some quality turkey, November is still known for that but now the dinner table may have a few extra mustaches. Movember marks a change in men’s health. “No Shave November” has been popular for a few years but it never […]

Movember, whiskers for a cause

Starting to notice more men sporting beards and/or mustaches? There is a good reason why. Movember Foundation started in 2004 in Melbourne, Australia as a way to raise awareness for prostate cancer and depression. Almost ten years later the idea has caught on as the cause has reached a corporate and even worldwide level in […]

Movember is More Than Just A Hairy Face

Movember 2013 has begun, and it’s more than just a hairy face.  It’s main purpose is to help raise money and awareness for men’s health, such as testicular and prostate cancers.  Whether you call it No Shave November or Noshember it’s time to ditch the razors and let your freak flag fly. The movement began […]