Movember, whiskers for a cause 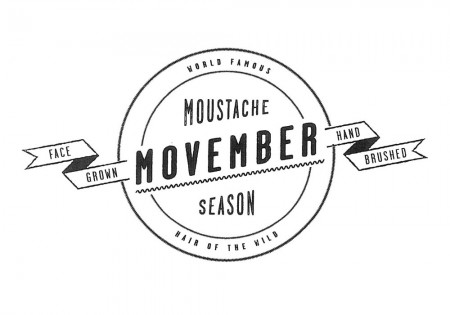 Starting to notice more men sporting beards and/or mustaches? There is a good reason why. Movember Foundation started in 2004 in Melbourne, Australia as a way to raise awareness for prostate cancer and depression. Almost ten years later the idea has caught on as the cause has reached a corporate and even worldwide level in support. No doubt Facebook, Twitter, Tumblr, and other popular social media sites will be sporting campaigns for Movember, or just personal shots of friends with a scruffy face. The idea being men growing out their facial hair to show support and awareness. Celebrities getting involved in the movement include Justin Timberlake, Jake Gyllenhall, Brad Pitt, and Hugh Jackman.

Prostate cancer develops in the male reproductive system. Cancer cells tend to metastasize from other parts of the body such as the lymph nodes and bones. Most men notice problems urinating, and difficulty during sexual intercourse. The most obvious is self exam and realizing a hard lump in the testes. Early detection is key when confronted with prostate cancer and getting proper treatment. Treatments often include radiation, chemo therapy, and surgery. As of 2013 an estimate of about One out of every six men in the United States will be diagnosed with prostate cancer and almost 30,000 men will die of prostate cancer, a ratio of about one in thirty men diagnosed with prostate cancer, and is the 6th cancer related causes of deaths among men. Prostate cancer occurs mainly in men over the age of 40. Common risk factors are genetics, early sexual activity, and dietary. Many men that struggle through the affects of prostate cancer suffer from depression while dealing with feelings of feeling ill during treatments, medical bills, mortality, and the worry of not feeling “whole” afterwards.

Raising awareness has improved the rate of survival of prostate cancer survivors. So girls, embrace your man’s scruffy face and hope that having facial hair for 30 days is the least of his problems. Encourage all the men in your life to help raise awareness with a fuzzy face, whether it is a father, brother, uncle, grandfather, or just that special friend. Men put down those shavers! Guys unite to combat prostate cancer one face at a time, take what could be a lifesaving movement and help raise awareness during the month of November and grow those whiskers out.