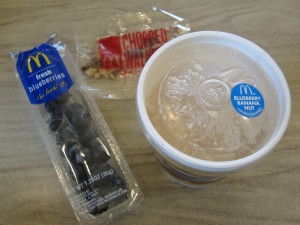 McDonald’s is now serving blueberry oatmeal. This is obviously a big deal as the term “Blueberry Oatmeal” is trending number one in the United States as well as the United Kingdom.

Blueberries have been credited with contributing to the longevity of indigenous natives in the arctic regions of the Northern hemisphere and are rich in natural anti-oxidants and pro-anthocyanidin. These small, juicy, sweet, round blue-purple berries are challenging bananas and strawberries for the title of most popular breakfast fruit. Recognizing the potential, McDonald’s has included blueberry oatmeal among its menu items.

Recognizing the power and effectiveness of social-media, McDonald’s has developed an aggressive strategy to manipulate this dynamic and all of its major platforms. The director of social media for McDonald’s U.S.A. Rick Wion says, “You don’t control things. You can only hope to steer things in certain directions.” To promote its new blueberry oatmeal, McDonald’s is using a savvy video campaigns, hashtags and blogs.

Thus far, the results have ratified the research and development.