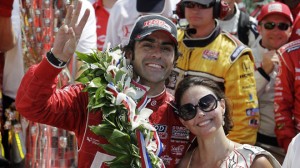 Okay, here are the stats:

Dario won the race for the third time.

The winner came from last-place (33rd) after the first pit stop to win on the last lap.

Now here is a story behind the stories. Franchini did win the Indy 500 three times. However, all three wins were under the yellow caution flag and, therefore, Franchini never faced the last lap thrills and skills against drivers like Bobby Unser, Mario Andretti or Jackie Stewart.

On the human interest side, popular race driver Dan Weldon won the Indy 500 last year but died, tragically, in the last race of the year. Dan had many close friends, but how improbable that three of these friends would finish 1, 2, and 3 in this year’s Indy 500. Also, how could another driver, who could’ve won the race but ended up finishing 17th still be able to smile, “I did it for my friend Dan Weldon. I know that he must be looking down from above and know one of his best friends won the race.”

Finally, there is Danica Patrick and the “Good Old Boys.” Danica has lead the Indianapolis 500 more laps than any woman in history. Danica could have won the Indianapolis 500 at some time in her career if  the “good old boys” club decided to give her a “ride” that would be competitive. Danica was offered anything she wanted by NASCAR. The good old boys of NASCAR did not want to give Danica a good “ride” either, but they saw in her the incredible animalistic image that she exudes, which is exactly the kind of image that NASCAR wanted to bring back some of the good old boys who had been co-opted by Formula One Cars. Now, Danica has the chance to win the biggest NASCAR race of next season: The Daytona 500. She made a startling statement after placing 30th in the Coca Cola 600 race in Charlotte on May 30, “I will race the Double next year…Indianapolis 500 in a Formula One car and then later in the afternoon, I will race in the NASCAR 600.” Take that, boys!