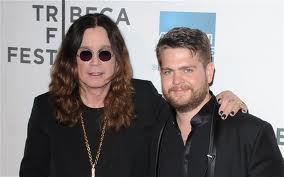 Son of Ozzy and Sharon Osbourne, Jack Osbourne told People magazine this week he has been diagnosed with Multiple Sclerosis (MS).

With the recent birth of his daughter, Pearl Clementine, with his fiancée Lisa Stelly, Osbourne’s diagnosis was most unwanted.

“I was just angry and frustrated and kept thinking, ‘Why now?'” Osbourne told People magazine. “I’ve got a family and that’s what’s supposed to be the most important thing.”

Mother Sharon Osbourne expressed her feelings of guilt today on the television show “The Talk.”

“And what I’m doing right now is not helping because I’m just feeling sorry for myself, and that is no good,” she said. “So we just have to think positively and get on with this show that we love.”

Earlier, on Monday, she blamed herself for her son’s diagnosis.

I keep thinking, ‘What did I do wrong?’ What did I eat or drink when I was pregnant?'” she told Hello! magazine. “I feel like it’s somehow my fault.”

Despite Osbourne’s motherly guilt, there is no known relation of genetics to the disease.

Her son, 26, went to the doctor after losing 60 percent of his vision in one eye and noticing a tingling sensation in his extremities.

MS is a chronic, progressive disease that attacks the central nervous system that is three times more likely in women than men. Symptoms of MS can include numbness, impairment of speech and muscular coordination, blurred vision and severe fatigue.

According to the National Multiple Sclerosis Society, about 400,000 people in the United States have MS and 200 are diagnosed weekly.

3 Responses to "Sharon Osbourne and son, Jack, emotional after his Multiple Sclerosis diagnosis"