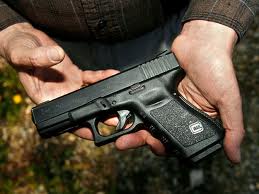 By Eric Lageson
July 20, 2012, 12:05 a.m.  James Holmes, 24, attends the premiere screening of “The Dark Knight Rises” at the Century 16 Theater in Aurora, Colorado.  It is the last of the “Dark Knight Trilogy” and the most anticipated film of the summer.  Theater 9 is packed.
Thirty minutes later, while pretending to answer his cell-phone, Holmes steps out a back door, props it open and sets off a gas canister.  Without warning, he blasts away into the crowd with an assault rifle, a 12-gauge shotgun and two 40-caliber Glocks.  A witness said, after his “favorite gun jammed,” Holmes stepped out to the back lot and surrendered to the police.  Holmes identified himself as the “Joker” – a featured character in “The Dark Knight.”  The result:  12 dead, 58 wounded.
Immediately and predictably, N.Y. Mayor Michael Bloomberg – famous for his ban on sugary soft drinks over 16 oz. – called for presidential candidates Barack Obama and Mitt Romney to state their positions on gun control.  Pres. Obama stated that he was “shocked and saddened” by the event.  I think he was overjoyed. Here’s why…
Democrats-liberals-progressives-socialists believe an all-out ban on guns will reduce violent crime.  In reality, this is a government power grab.  Communist China doesn’t allow private gun ownership.  Why is that?  A dictator knows an unarmed populace cannot defend itself against a totalitarian government.  It doesn’t matter whether the established power is left or right wing.
This election season, the presidential race will be close, very close.  One state – one swing state – even Nevada could decide it.
During the presidential debates, will Pres. Obama and Gov. Romney be asked about gun control?  Won’t Obama look the part of the hero – with his trembling lip – saying that the blood and violence must stop?  Won’t Romney seem insane by saying that he’s for the right to bear arms, that is, the Second Amendment?  If Obama is re-elected, I guarantee a handgun ban before his second term is complete.
Gun control will not stop a criminal from buying a gun on the black market, but it will take away the rights of the average law-abiding citizens who simply want to protect their families.  The police can’t protect you 24/7.  It’s up to you.
In the aftermath…
Sadly, some theater chains have already overreacted by searching patrons and not allowing moviegoers to wear costumes or carry toy weapons.  What’s next, X-rays and body scans?  Because of the actions of one maniac, everybody suffers.
Before seeing the movie on July 20th, I had briefly heard about the shooting and was in no way deterred from going and I hope you aren’t either.  The current nanny-state mentality is, in the long run, worse than anything a pretend “Joker” could do.
(Note:  “The Dark Knight Rises” concerns a plot wherein a group resembling the 99% anarchists holds Gotham City hostage with an atomic bomb.)