Doomsday 2012 Surviving the Event Part one: Survival of the Fittest

Ok, let’s discuss how to survive a catastrophic event. As I stated previously, we really don’t know for sure what will happen on or about 12/21/2012 if anything happens at all. I have also mentioned previously numerous possibilities for carnage and destruction as well as some more realistic possibilities. Let’s start there. 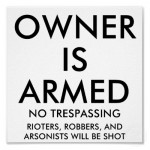 , like a major earthquake or earthquakes. This type of event would terrorize most people on the planet. No one would be going to work, as perhaps there has been a ground upheaval, fissures and cracks in the Earth opening up everywhere. Roads are useless because of this ground upheaval, and transportation comes to a grinding halt.

In short order, the food chain will be interrupted and most folks only have a weeks’ worth of food stored in their homes, maybe even less. Once this is gone, looting will begin in earnest.

The first thing you sh

ould do is acquire a firearm or two to protect your loved ones. You should do this long before anything happens, and if you haven’t already, NOW would be a good time.

So try and remember that you and your family come first at all times.

Supermarkets, department stores, convenience stores and restaurants, fast food or otherwise, and any vehicles transporting these goods will be the first places to be targeted by looters seeking resources. These will be easy marks as no one will be at work and any loyal employees dumb enough to try and defend these places will probably be killed by the looters straight away.

These resources will go quickly.

Truckers carrying foodstuffs will try to hide their load or distribute the contents of their trailers to friends and family or to the police and the military but will more than likely be killed and then have their truck hijacked.

If you are a trucker, I recommend that you drop your trailer and mash your motor toward the home 20, hammer down. Mama will be waiting on you.

In urban areas, supermarkets generally only stock enough fresh food to service their customer base for 3 days. Next time you’re in your local supermarket, take a look around, and you’ll see what I mean. Poke your head in the back stock room, and you’ll see that it is unusually small, most times just a receiving area. They might have a dropped trailer in one o

f the dock spaces holding the overflow merchandise. If you notice, there are other supermarkets in close proximity to your market, maybe within a mile or two, and maybe the same brand name as yours. That plays to population density, and these markets pay rooms full of bean counting pencil pushers to figure this stuff out.

In rural areas, markets may have a larger inventory of these food items because the population is more spread out in the surrounding area.

It will take about a day and a half for these resources to disappear, and then it will be anarchy in the streets.

One might say that we are humans after all, not animals. The fact of the matter is no matter how civilized we are, we are still animals down in our core, and when faced with mass hysteria, death, destruction, and the defense of our loved ones as well as our survival, our animalistic instincts will be brought to the fore by our brain in an effort to survive. The will to live is very strong in humans as evidenced by our ascension to the top of the food chain many eons ago.

be prepared for some type of “Apocalyptic” behavior from all sides.

Next will be food distribution warehouses in industrial areas.

Food warehouses are usually fenced in and have security guards. I don’t think anyone will be trying to defend these places, but I could be wrong. Still, gaining entry to a warehouse is difficult at best, and these places will be attacked by groups of armed marauders. They will have the tools needed to gain entry and the guns to kill any defenders or anybody else that gets in their way.

And then come private residences, homes and apartments.

Groups of armed individuals will go house to house stealing your resources and murdering and molesting anyone that gets in their way.

Your chances of defending your home are slim at best unless you’re wealthy and can hire your own security force. Regular folks like you and I won’t have a chance. Now I’m not saying don’t try and defend your resources, just be smart about it.

If you board your home up or have barred windows or some other plan to keep people out, it probably won’t work, and here’s why.

Put yourself in the shoes of the potential looter. If you came upon a house that was boarded up or had the windows and doors barred, you would have two choices if you couldn’t gain entry.

One, you could move on to the next house, which you are already going to do eventually.

Two, you could burn the house down and salvage whatever doesn’t burn. I mean if you can’t get inside, why not burn it down? And if the home appears secured in any manner, the looters will think that there are resources inside, otherwise why would someone go to all this trouble.

That being said, the only survivors in the urban areas will depend on the ability to murde

r other people before they murder you.

The one with the most bullets will win.

The reality of the situation is that if you want to survive, you will have to relocate to a more rural area that you can defend.

And wait for the looters to thin the herd, so to speak, so that there are less people to defend your resources from.

So for right now, get some weapons and start buying canned goods.

Next up: What to stock up on and where to go in your area to be safe.

3 Responses to "Doomsday 2012 Surviving the Event Part one: Survival of the Fittest"