What will Obamacare mean for the workers in the new normal economy? 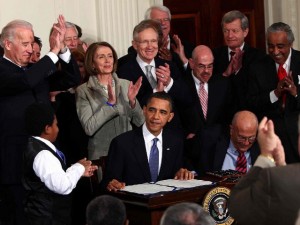 Those who work in the new normal economy are being largely ignored in analysis of how Obamacare will affect people at various economic levels. Reacting to the Supreme Court’s decision to uphold the individual mandate under the federal government’s taxing authority, there has been extensive analysis of how the mandate will affect people at different income levels, but the analyses always stops going downwards at the minimum wage. However, workers in industries that must compete directly against workers in other countries, such as call center workers, telecommuters, and freelancers working over the internet, are increasingly working for commissions, royalties, partnership income, shares of future IPOs and other non-wage income. These are the workers of the new normal economy, in which the world is flat and global.

On July 1, 2012, Stephen Moore, Senior Economics Writer with the Wall Street Journal, appeared on Fox and Friends and revealed that 75 percent of the burden of Obamacare will fall on those making under $120,000 a year. Workers in the new normal economy often have widely varying income from week to week and month and to month, but if the typical worker did not on average make less than the minimum wage, it would not be to the employer’s advantage and this style of work would not be on the rise.

Let’s consider a hypothetical worker who makes on average $100 a month. To save money, she lives with roommates or relatives, so if she were to apply for any type of government assistance, the incomes of the people she lives with would all be added together and then divided and would probably result in her being considered not living in poverty since at least one person must own or rent the property and likely has a high enough income to afford to do so. Even if the added and divided income for this household fell below the threshold for eligibility, if one of the other people living at her address refuses to co-operate with the application process, assistance will be denied. If she were to move out, she would lose access to the phone or internet connection by which she makes money and would then presumably have no income, so she is likely to continue to live with other related or non-related adults. If she lost her source of income, she could not collect unemployment because she is not a full time wage worker.

Since other government programs for the poor such as food stamps, rental assistance and utility assistance all use the model of counting the incomes of everyone who lives at the same residence address, it is likely that Obamacare’s provision of assistance with purchasing mandated insurance will follow the same model. Therefore, she will not be eligible. Therefore, she will have to find a way to comply with the law entirely on her own resources. If the eligibility is calculated on both income and assets instead of income alone, it is likely that she would be ineligible even if she became homeless and lived in her car, because she would own an asset: her car.

The individual insurance mandate in Obamacare does not specify how much insurance will cost. Even very cheap insurance plans typically run at least $500 a month, so our hypothetical worker will not be able to buy insurance. The other alternative is to pay a fine for being unable to afford insurance. The cost of the fine is specified: either $95 or one percent of one’s annual income, whichever is higher. Since one percent of her annual income would be $12, and that is less than $95, she would have to pay the minimum fine of $95. That amounts to a 10 percent tax on her annual income.

What will happen if she does not pay it? What if she decides to pay her electric bill that month, or, possibly, buy some actual medical care? The Obamacare legislation provides for hiring more IRS agents. The intention is obvious: the power of the IRS to fine, arrest and even imprison will be deployed against the poor.

The rationale for Obamacare was that it was supposed to be a solution to the problem that too many poor people do not have insurance. Even the Obama administration itself admits that the Obamacare mandate will not result in insurance coverage of 100 percent of Americans. When the mandate arrives in 2014, too many people may find themselves in the situation of our hypothetical worker in the new normal economy.

One Response to "What will Obamacare mean for the workers in the new normal economy?"