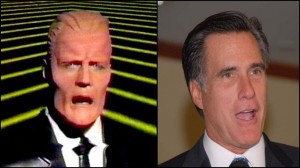 In what may be the most bizarre incident of the 2008 primary season, investigators for the John McCain campaign have discovered that Mitt Romney is an ingenious blend of state of the art robotics and artificial intelligence based on the popular 80’s television character Max Headroom.

“We were doing the vetting of possible running mates for Senator McCain when one of our staff noticed that Mitt Romney had an uncanny resemblance to Max Headroom,” said Rick Davis, McCain campaign manager. “We traced his origins from the Headroom television show, to the Disney Animatronics Division, on through AI researchers at the Massachusetts Institute of Technology. We were shocked. He looks amazingly life-like.”

“I always knew there was something weird about that guy.” commented Congressman Ron Paul. “No wonder he couldn’t connect with the public. Let’s see who has the last laugh on this one.”

The discovery triggered a hot debate among scientists and religionists over whether or not the Romneybot should be considered a sentient being.

“It walks and talks and responds to outer stimulii,” stated Richard Dawkins. evolutionary biologist and ardent atheist. “It does all the things humans do better than most. The Rommeybot is the next step in human evolution. There is no doubt that its’ jokes aren’t funny, and it seems a little stiff, but many humans have those same traits. I don’t know if its’ CPU is capable of programming itself. If it is, this is a sentient being.”

“White folks is crazy,” replied Reverend Jeremiah Wright, first Pastor to be thrown under the political bus in 2008. “That thing ain’t got no soul. I knew it the first time I ever saw it.”

“I’m just glad it’s not Jewish,” said Reverend John Hagee, second Pastor to be thrown under the political bus in 2008. “That’s all I have to say.”