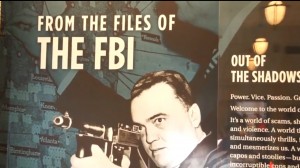 The National Museum of Organized Crime and Law Enforcement in Las Vegas, Nevada commenced its Speaker’s Series on Wednesday night with renowned undercover FBI agent, Mr. Joaquín “Jack” García. The Executive Director of the Mob Museum, Mr. Jonathon Ullman, was on hand to introduce the series and the legendary Mob icon to the sold out crowd. The idea of the series is to hear eye witness accounts from individuals who had relationships with Organized Crime and to go ‘behind’ the story. Mr. García led over 100 operations with the FBI in a 24 year period. In his most famous operation, he went undercover as the persona Mr. Jack Falcone where he was able to infiltrate the Gambino crime family that led to the eventual arrest of over 30 individuals.

Mr. García was born in Havana, Cuba in 1952. His family opted to move to the United States as political refugees when he was nine years old. He grew up in the Bronx, New York and received football scholarships and graduated from the University of Richmond. Inspired by the movie Serpico, a 1973 American crime film starring Al Pacino about a police officer who refuses to take bribes, Mr. García applied to work for the FBI. After becoming an American citizen, he was accepted to the FBI in 1980. He was sent to Quantico, Virginia to attend training and was the second person of Cuban origin to graduate from the FBI Academy.

Mr. García’s first crime syndicate setting was in Newark, New Jersey. He posed as a bookie and money launderer. Through the years, Mr. García worked in a myriad of fields but was especially talented in the narcotics division. He was able to collude with various organized crime syndicates from Central and South America, Russia and Asia during his lifetime. He ran several different operations often simultaneously involving multiple identities with various crime consortiums, never once making a fatal error. Not only was he able to conduct multiple scenarios at once but also the sheer number of operations that he conducted in his tenure is a testament to Mr. García’s ingenuity. His bilingual ability and street smarts allowed him to be trusted by bad guys though he never wavered in his honest convictions. During his lecture, he gave a graphic portrayal of mules, individuals used to smuggle drugs across borders and their often unsightly demises which all too often end in death. His talk gave an in depth look of the life of an alias. Mr. García’s undercover FBI work and famous operation is set to be made into an upcoming feature film.