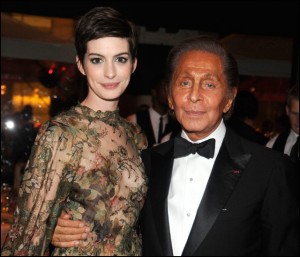 Fashion conscious ladies have such a clean up-close or even from a distance ambiance. Anne Hathaway projects this freshness as in just a few short years she has gone from awkward teenager to fashion icon. Hathaway is someone people watch at awards shows because of her classic style. So when she announced she was getting married, people wondered what she would be wearing on the most special day of her life.

But as it turns out, the designer of her wedding dress announced the choice before the actress had a chance to. “Speaking to reporters at the New York City Ballet Fall Gala on Thursday night, the iconic designer revealed that he ‘did the dress’ for Hathaway’s upcoming nuptials to fiancé Adam Shulman,” said People. “He added that the two are extremely close.”She’s a very good friend of mine,” he shared. “She’s like my daughter!”

So who is the designer who gave away the secret? It is none other than Valentino Garavani. There has been talk he would design her dress, but until he made the statement, no one knew for sure. And Hathaway is no stranger to Valentino; she wears his designs on a regular basis. The latest of those she wore at the Fall Gala, which Valentino also attended. Hathaway also wore a Valentino gown to the 2011 Oscars, which she co-hosted. Garavani crowned her the “godmother” of his virtual museum launch last year, and Hathaway frequently pops up on chi-chi red carpets wearing the designer’s creations, so we’re not shocked that she wants Valentino to craft her the most important couture she’ll ever wear.

Hathaway, 29, revealed her engagement to Shulman in November 2011, flaunting the huge sparkler designed by the actor himself.

Valentino and Hathaway, of course, are long-term pals. Garavani crowned her the “godmother” of his virtual museum launch last year, and Hathaway frequently pops up on chi-chi red carpets wearing the designer’s creations, so we’re not shocked that she wants Valentino to craft her the most important couture she’ll ever wear.

The designer spoke about Hathaway back in December, giving away hints that he might be the designer of her dress. “I am so happy for Anne. And I would do my best creation for her,” Valentino told People. “She’s a lovely person. She wears the clothes very, very well. So I would do something special.”

But there is still no word on what Hathaway’s wedding dress might look like, and it’s very possible we won’t know until after the wedding is over.

Unfortunately, the Valentino frock is the only thing that’s slipped about Hathaway’s wedding, as she’s keeping the whole thing mum — she claims she’s been “too busy” to plan it. A diversion, perhaps? If there’s already a bespoke Valentino gown hanging in Anne’s closet, maybe she’ll be walking down the aisle sooner than we think.

Hathaway and Shulman have been together since 2008, shortly after Hathaway broke up with boyfriend Raffaello Follieri after he pled guilty to multiple crimes.