By DiMarkco Chandler on September 22, 20124 Comments 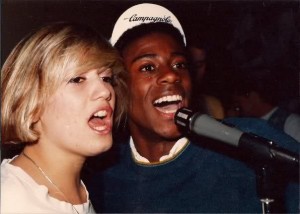 Before Taylor Swift, Gwen Stefani’s breakup song, “Don’t Speak” rode a wave of young teenage fandom carrying the rock star to legendary places. It’s been 16 years since their iconic hit Don’t Speak hit the charts, but Gwen Stefani and her No Doubt band mate Tony Kanal still finds it tortures him and is hard to talk about their breakup.

Gwen, 42, wrote the song after Tony broke up with her, following a seven year relationship with her ex-boyfriend.

The pair now say it was an extremely difficult time for them as they had to perform the song every night together, with Tony calling the torturing experience ‘brutal’.

Tony, 42, revealed to the Guardian that it wasn’t easy for him to stand next to his ex-girlfriend on stage while she sang of the heartbreak he caused.

“Oh definitely. We were on tour for Tragic Kingdom for 28 months. We were going through the breakup, and in every interview we were talking about it so we were opening this wound on an hourly basis.”

“It was so brutal but I don’t know how we made it through.”

The pair have now long moved on from the heartbreak, and Gwen thinks it actually helped her become a better songwriter.

“Before I was really passive, all I cared about was being in love with my boyfriend. I didn’t have any creative power, nothing.”

‘But after the breakup I just started writing all these songs and suddenly I was: “Oh I think I’m really good at this!”‘

Gwen now splits her time between Los Angeles and London, where she lives with her rock star husband Gavin Rossdale and their two boys, Kingston, six, and Zuma, four.

Even though Gwen and Gavin are both fronting rock bands, it appears Gavin isn’t a major No Doubt fan.

“Oh he’s never been a fan of what we do. He’s more into dark, indie stuff,” Gwen said during the interview.
“But I’m not saying he doesn’t think I’m amazing.”

No Doubt is set to release their first album since 2001, Push and Shove, next week.

Earlier this month Stefani claimed that she never wanted to make another solo LP and insisted that she was happy and creatively fulfilled recording again with No Doubt. ‘Push And Shove’, meanwhile, will be the band’s first album since 2001’s ‘Rock Steady’ – you can watch the video for the record’s single ‘Settle Down’ by scrolling down and clicking below.