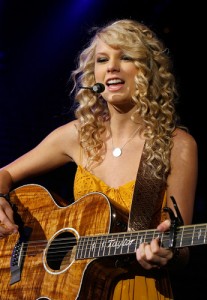 1. Taylor was born on December 13th, 1989, in Pennsylvania. She considers thirteen her lucky number. Not only because that’s the day she was born but “Swift,” assures everything that is connected to that number can only mean something fantastic. “Basically whenever a 13 comes up in my life, it’s a good thing.”

2. At age 14, “Taylor” moved to Nashville to pursue a career in country music. She has been playing a 12-string guitar since she was 12-years-old.

3. “Swift” consider herself a songwriter before anything else, and “has never written anything,” she doesn’t mean to. She is also famous for not changing the names of boys she sings about. She began writing songs when she was just a teenager.

4. “Taylor” is more comfortable wearing a dresses than blue jeans and a t-shirts. Her ideal outfit includes sundress and cowboy boots. She also loves wearing bracelets.

5. Her Prince Charming criteria include great hears, immature sense of humor, and quiet confidence. Event though she’s not kind of girl who needs a boyfriend, she said.

7. “Taylor” was reported dating “Twilight” star Taylor Lautner. Currently she is dating Connor Kennedy.
.
8. “Taylor’s” song “The Outside” was one of the first songs she wrote (when she was 12) as she felt like a complete outcast at

school. Since then, “Swift” has written over 200 songs.

9. Aside from songwriting, “Swift” also likes to express herself through painting. She thinks Kery Russell and Ellen DeGeneres are the coolest celebrities ever. Taylor also wrote a 350-page novel, as of yet unpublished.

10. “Swift” became the youngest recipient ever of the Entertainer of the Year Award at the 2009 Country Music Awards. The 22-year-old until now is worth nearly $50MM.