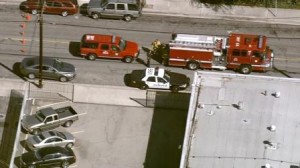 Police say Five people were shot and two were confirmed killed in two related shootings in Downey on Wednesday. [Video]

Multiple shots were fired at both locations.

Downey police Lt. Dean Milligan told KCAL-TV that the shootings occurred Wednesday morning at a business called United States Fire Protection, which appeared to be located across from a Coca-Cola bottling plant,  and at a nearby home, where family members of the owner live.

Details regarding the wounded victims’ conditions and gunman were not immediately available. The two injured victims were transported to St. Francis and Long Beach

The shooting was reported at 11:25 p.m. The gunman’s vehicle was described as a 2010 Chevrolet Camaro.

Dean Wright, who works next door, described the business as a family owned fire extinguisher business. He told NBC4 family members lived at the Cleta Street residence located just a few blocks from the business.

“I’m right next door, and I never even heard a shot,” said Wright. “I looked and the police had surrounded the building.

The suspect is believed to be a 30-year-old African-American male about 6 feet tall and 230 pounds.

He is believed to be driving a vehicle carjacked from one of the victims, a 2010 2-door Chevy with the license plate 6LEA010.

A 4-year-old boy who was unaccounted for and may have been inside the residence at the time of the shooting was located and is safe.

Police are investigating the incident and have no comment on a possible motive.

Downey is about 20 miles southeast of Los Angeles.