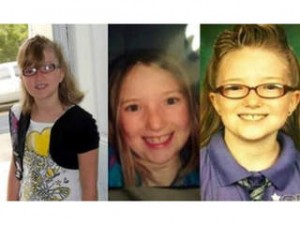 WESTMINSTER – Chief Lee Burk, of the Westminster Police Department today announced that the dismembered body of Jessica Ridgeway has been found in Arvada, Colorado; seven miles from where she disappeared. Authorities have positively identified the body of the missing 10-year-old as Ridgeway.

Westminster police announced Friday that now the search for Jessica has turned into a mission for justice.

The body was found not intact Wednesday by trash crews in the Pattridge Park Open Space area in Arvada. Authorities have spent the last two days working to identify the body and searching in and around the area for more evidence.

Jessica’s mother last saw her daughter walking to school on Oct. 5. The girl never arrived, setting off a frantic search by hundreds of law enforcement officials and prompting a nationwide Amber Alert.

The FBI’s Behavioral Analysis Unit released a list of changes that a person committing a crime against a child would exhibit.

Among them: sudden differences in appearance, missed appointments, being absent from work, or leaving town with no explanation. Police have ruled out Jessica’s parents.

The suspect is likely male and might have recently missed work or suddenly left town, according to the FBI’s Behavioral Analysis Unit. The suspect might have already changed his appearance and gotten rid of his car.

The FBI is asking for the public’s help locating the suspect, who might have been a “no show” and missed work immediately after the incident and offered a plausible excuse such as illness, death in the family or car trouble.

FBI experts believe the individual might express an intense interest in the status of the investigation and pay close attention to the media. But some offenders might quickly turn off media accounts or try to redirect conversations concerning the victims or their families, according to the FBI.

Joly said the public should be looking for “abnormal behavior.”

Investigators are now focusing on cell phone towers near Jessica’s Westminster, Colo., home, where her backpack was found and where the remains were discovered in Arvada, Colo. If a phone number registers at all three towers, it could lead to a suspect.

Hundreds of officers continue to search fields, ravines and neighborhoods today near the park in Arvada where the body was found Wednesday night, seven miles from where Ridgeway disappeared last Friday.

The condition of the body delayed identification because the body was “not intact,” police said Thursday.

This extended the length of time it took for investigators to positively identify the body, according to Westminster Police Department spokesman Trevor Materasso.
Police were alerted to the body Wednesday night hours after they said that Ridgeway’s parents were not suspects in her disappearance.

Ridgeway’s mother, Sarah, told police she last saw her daughter in Westminster, Colo., Friday morning when Jessica left for school. The fifth-grader never showed up at a nearby park where she was supposed to meet friends for the one-mile walk to her elementary school. It was a route she took every day, but this time she never arrived.

The school called to report Jessica absent, but Sarah Ridgeway told police she was asleep during the day because she works overnights and did not get the call until eight hours later, when she called police.