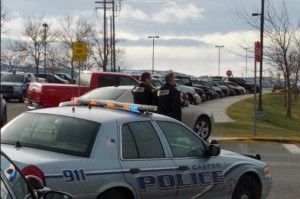 Casper, Wyoming – According to reports, there has been a tragic bow and arrow type shooting on the campus of Wyoming’s Casper College resulting in the loss of life for 3 persons and another person has been seriously wounded. A college spokesperson said that he believes that the shooter is dead.

Police found a male faculty member dead and a second person seriously injured. That person was taken into custody and may be a suspect.

An updated report now indicates that Police told NBC station KCWY of Casper that two of the bodies were found on campus. One appeared to be a male faculty member, and the other appeared to be of “student age,” Fujita said. The third body was found off campus.

Fujita says the campus has been locked down and students are advised to stay in their present location until the all clear sign is given by police.

Fujita says he had no additional information, including how the attack happened and who was killed.

Casper College is a two-year community college in Wyoming’s second-largest city. Casper, population 56,000, is about 250 miles northwest of Denver.

Wyoming residents refer to Casper as the “Oil City” because it’s a hub for the state’s small oil industry.

The city is flanked to the south by Casper Mountain, scene of a massive wildfire in September that burned more than 24 square miles of forest and meadows and destroyed 37 homes and cabins.

The school has a small security team on campus, but they’re not armed.

“It’s such a small town that Casper police is very close,” Fujita said.

He said police found a male faculty member dead and a second person seriously injured. That person was taken into custody and may be a suspect.

Police indicated the weapon was a “bow and arrow type,” Fujita said.