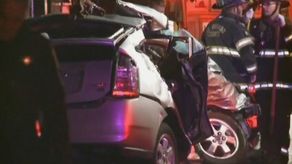 Highway 50, El Dorado County – A devastating two-car collision killed 4 people and injured five other on U.S. California Highway 50, just east of Placerville Saturday night. The tragic fatalities included two children occurred when a car heading west in the Apple Hill area veered across four lanes of traffic and into the path of a minivan.

The first reports picked up by the media indicated that there was only one person dead, however, Highway Patrol has confirmed that the loss of life was much worst, reporting three additional deaths.

According to Associated Press, three people in a Toyota Prius had died at the scene of the accident, which occurred at approximately 6:05 p.m. local time.

Among those killed in the crash were the 38-year-old male driver, an adult woman, and a boy, all from San Francisco, stated California Highway Patrol Officer, Sean Ricci.

There was only one other occupant in the Prius, a 10-year-old girl who also resides in San Francisco. She sustained severe injuries and was transported to a nearby medical facility to be treated, Ricci disclosed.

The other vehicle involved in the collision was a Toyota Sienna minivan. It was caring 4 passengers and a driver when it was broadsided by the Prius, critically injuring a 4-year-old Placerville girl who was rushed to a nearby hospital, where she was pronounced dead.

The other four passengers in the minivan, a 35-year-old female driver, a 51-year-old man, and Twin boys,1-year-old’s, suffered minor to moderate injuries.

Presently, no names had been released by the hospital or CHP.

The minivan was headed east in the slow lane of Highway 50 when the Prius crossed its path.

Ricci said he did not know the speeds of the two vehicles or what caused the driver of the car to veer from the westbound slow lane of Highway 50, across the fast lanes in each direction, and into the minivan’s path. “There’s an infinite number of possibilities.”

The highway where the crash took place is just outside of Placerville, about 45 miles east of Sacramento. The highway has two lanes, with minor to moderate curves, and with a speed limit of 65 miles per hour, according to California Highway Patrol spokesman Officer John Frizzell.

Investigators have pulled computers from both vehicles that would indicate how fast they were going at the time of the crash, but collecting that information would probably take days, Frizzell said.

Parts of the road were closed on Highway 50 and Five Mile Road in Camino, east of Placerville.

This is a difficult investigation because police say there were no witnesses.

“It was an unwitnessed accident. We don’t have anybody who actually saw it happen,” said Sgt. Jim Byers, El Dorado County Sheriff’s Department.

Weather conditions at the time of the crash were clear.