By DiMarkco Chandler on November 11, 20122 Comments 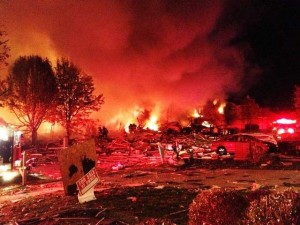 Indianapolis (WI) – The Indianapolis Fire Department says there’s been a powerful explosion, which completely leveled one home and two other homes are on fire.

The incident occurred on the 8400 block of Field Fair Way and Towhees Drive; that’s where reports say the explosion happened.

Several callers reported hearing a loud blast in the area, right on the city’s south side near the area of Sherman Drive and Stop 11 Road.

75 firefighters are presently on the scene trying to put out the fires. ‘

Presently, the cause of the explosion and the severity of the injuries were not immediately clear, according to Captain Rita Burris.

A homeowner in the area says his house shook and “teeter-tottered” on its foundation.

With police and fire departments on the scene, there are still no clear answers.

Reportedly, homeland security is also on the scene.

Mayor Ballard’s spokesman, who lives in the area, says the mayor is on the scene, inspecting the damage.

We will have more information when it becomes available.