The little girl was diagnosed with leukemia last spring, but her disease is now in remission.

Mykayla’s mother, Erin Purchase, 25, a medical marijuana patient herself, administers up to a gram of cannabis a day to the girl; that is the equivalent of smoking ten marijuana cigarettes, or joints.  The child takes a pill form of the drug, cannabis oil, and is sometimes given cannabis laced food.

My first reaction to this story was one of empathy for the little girl, for all she must be going through with her disease and her pain.  I felt sympathetic towards the mother, I could not imagine what she was going through as she watched her daughter suffering; first through the symptoms of the disease, then from the side-effects of the poison coursing through her veins.

However, as I began to research the story, another side began to unfold and I had to reserve my compassion.  Mykayla’s father came for a visit with his daughter and was not so enamored with the idea that his child, nay, his seven year old child, was taking cannabis for a disease he states 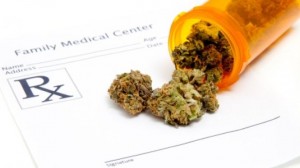 Jesse Comstock, Mykayla’s father, who lives in North Dakota, came for a visit and claims his daughter was “stoned out of her mind”.  (foxnews.com)  He states she simply wanted to lay around and play video games all day.  Comstock is concerned the pot use will inhibit his daughter’s intellectual growth as she ages.

After observing her strange behavior in August, he took Mykayla to a lab to be tested; the tests resulted in positive levels of THC for a daily adult marijuana habit.  Police in the area have contacted the mother and reviewed her medical marijuana paperwork to determine it is in order.

Still, Jesse Comstock is not satisfied; he believes the damage being done to Mykayla is far reaching, “She’s not terminally ill,” Comstock said. “She is going to get over this, and with all this pot, they are going to hinder her brain growth.”  “It’s going to limit her options in life because of the decisions her mother has made for her.” he added.  (foxnews.com)

Mykayla’s mother disagrees; Erin Purchase she thinks it safe, even claiming to have used it while breastfeeding and during her second pregnancy.

I am torn; I believe there are great benefits to using medical marijuana in some circumstances; however, if Mykayla is in remission, then how severe are her symptoms?  And, how much is too much? And, how young is too young?

My absolute judgments are reserved, we can never know all of the details of the story; especially when dealing with divorced or separated parents, there is a reason they are no longer together.

Still, should there be an age limit, especially if the patient is not terminal?  Medical marijuana is still in the embryonic stages of our using it for good, there are so many unanswered questions, and so many more to come.

Seven Year-Old Medical Marijuana Patient Being Torn Between Parents added by dawn7 on November 28, 2012
View all posts by dawn7 →