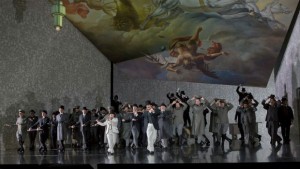 Un Ballo in Maschera (A Masked Ball) is a Guiseppe Verdi Opera told in three acts, which opened Thursday night at the Metropolitan Opera stage. The opera’s plot is based on a true story of the assassination of King Gustavo III of Sweden in 1792. Gustavo was an enlightened despot who seized government power in a 1772 coup d’etat. On March 16, 1792, Gustavo arrived at the Royal Opera House in Stockholm to first enjoy dinner and then to attend a masked ball scheduled to commence at midnight. According to the historical record, while having dinner Gustavo received an anonymous letter threatening his life, the letter was ignored since he was accustom to such threats. After dinner, Gustavo left the dining room to take part in the masquerade. However, upon entering the party in costume, his conspirators recognized him due to the Royal Order of the Seraphim that glowed on his cape. His murderer moved to the left of the king and fired his pistol with the shot entering his back. Gustavo did not immediately die. In fact he lived for 13 days longer; only succumbing to his injury on March 29, 1792 after the wound became infected. Verdi completed his opera in 1859, adding to it, a love triangle to further complicate the plot and inject passion to the score.

Because of the political climate, Verdi had to hide some of the specifics in order to placate the censors, especially in Naples, where the opera was scheduled to be performed, and who refused to permit a tale of regicide to appear on a Neapolitan stage. Verde was forced to change the setting from Stockholm to Boston and the tenor role from a Swedish king to a colonial governor, and opened it in Rome. The new Met production restores the setting to Sweden.

The new production is directed by David Alden, and though loosely based on Gustavo’s assassination, it tells a somewhat different story of the Gustavo’s secret love for Amelia, the wife of his secretary and close friend, Count Anckarstrom. While he is aware that there is a plot against his life, Gustavo ignores the warning ans meets Amelia in secret at midnight. The count learns of their love and unites with the conspiracy to kill the king. Alden does a masterly impressive job with coherence, which past directors has struggled to perfect.

Alden’s staging, while flawed, did not deserve all of the angry boos that rained down during the opening-night curtain calls. It takes place in the early twentieth century, with a swerve into the age of Mozart (evoked by Verdi’s sublime mazurka) in the final scene. The director grasped Ballo’s hybrid and meta-theatrical nature. The opening scene’s giddy stretta, Dunque, signori, aspettovi, played out like a Busby Berkeley spectacular, with high kicks and tumbling waiters and brandished coupes de champagne, making the crashing chords and sepulchral clarinet tones that follow in the soothsayer Ulrica’s den all the more chilling by comparison. The conspirators whose sardonic guffaws end Act II peered at the unveiled Amelia through opera glasses as they sang so mistakenly that a tragedy had become a comedy.

The final ball, too, was superbly staged. A burst of applause usually greets the real-time scene change from Gustavo’s study to the masquerade where he will die. At the Met, though, Verdi’s whirlwind of modulations swirled as black-clad revelers and angels of death appeared to seep through the edges of the ballroom’s mirrored walls and lustrous floor like so many inky puddles reaching out to swallow the king. Brigitte Reiffenstuel’s costumes recalled Alexander McQueen’s disquieting feathered gowns, and Adam Silverman’s lighting here cast mother-of-pearl reflections that echoed and exploded the moiré patterns seen in Paul Steinberg’s designs for Acts I and II. The production was haunted by a painting of the mythological character Icarus, whose wings of wax and feathers melted when, undone by hubris, he flew too close to the sun.

All of that said, Alden’s work was not uniformly apt or inspired. Steinberg’s sets, most with skewed angles in the style of film noir, gave this Ballo an excessively sinister edge. (Shimmering with irony, Verdi’s opera is “comic” perhaps most of all in its bloody final scene, when the dying Gustavo forgives his murderers and the onlookers in a blaze of musical light liken his mercy to divine grace.) Gustavo and Amelia sang their wild, guilty love duet from opposite ends of the stage, barely touching or even looking at each other.

Regie clichés abounded, including bureacrats in bowler hats à la Magritte and writhing dancers indulging in vaguely sadomasochistic antics. (The twitchy choreography is by Maxine Braham.) The lighting shifted repeatedly and to no discernible end during the scene at Renato’s house, set in a pitiful black-and-white box that may have been a ham-fisted attempt at representing a cuckold’s primitive sense of justice. The scene on the heath brought to mind Laurent Pelly’s aggressively ugly MetManon, and Ulrica’s clients seemed to be the witches from Adrian Noble’s Macbeth wandered into the wrong opera.

Musically this Ballo offers much to admire. As Renato, Gustavo’s friend-turned-mortal-foe, Dmitri Hvorostovsky sang gloriously and with greater discipline than I have ever heard him summon in Verdi. Alla vita che t’arride, plodding when performed by lesser artists, unfolded with grace and urgency. The baritone saved his bluster for the vengeful bits of Eri tu and in the rest of that great and multifaceted aria spun insolently long, tense, slow-burn phrases, ending the scene in heartbreaking manner with his face buried in a wrap left behind by Amelia.

Hvorostovsky and Sandra Radvanovsky have white-hot chemistry on stage, making Renato’s change of heart about the king he had loyally served fully credible. As Amelia, 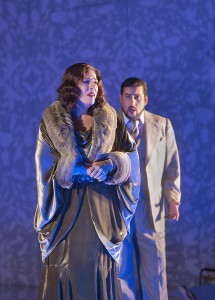 Radvanovsky needed to enunciate more clearly, and her voice under pressure sometimes turns sinewy, but her dark sound and phosphorescent upper register are ideal for the music of Verdi’s tormented heroine. The marital love that so palpably still simmers between this husband and wife made her desolate, pleading Morrò, ma prima in grazia devastating, and her voice rode the climaxes of the love duet and the opera’s driving ensembles with thrilling ease.

Though we hear Ballo as pure Verdi from start to finish, such works inevitably drew on stimuli that’s not known to us today, resulting in a piece that no doubt felt far more heterogeneous in its own time than what we now hear. Directors such as Alden attempt to recapture that quality with a modern theatrical language familiar, from Expressionistic lighting to the Broadway flavor of lighter moments. But unlike Willy Decker’s less aggressively updated La Traviata, Alden’s concept is, for his detractors, less easily tuned out.

The visual vocabulary of Paul Steinberg’s sets, unified by a series of diagonally geometric shapes, created one handsomely composed stage picture after another, and, in the masked ball scene, had some appropriate Zeffirellian grandeur.

Relationships among the characters were beautifully drawn, sometimes exploring the fine line between violence and affection. One more thing about the wit: The fortune teller Ulrica talked about consulting Satan and then swigged from a flask in her purse. I did part company with Alden’s ongoing use of Icarus imagery, seen initially in an ornate stage painting but becoming more prominent, suggesting that King Gustavo’s assassination had that myth’s sense of visionary hubris. In fact, Gustavo is just morally corrupt. But this was hardly grounds for dismissing the production.

Musically, the performance showed how top artists become even better. That wonderful breath control that has allowed Hvorostovsky to take long phrases in a single breath is, more than ever, a vehicle of deepening characterization, his voice having grown beautifully into Verdi repertoire. Alvarez doesn’t vanquish memories of Luciano Pavarotti, who brought a special darkness to Gustavo, but he’s as fine as any Verdi tenor singing today.

Alden also must have felt the need to have several things moving at once as it appeared the stage was often filled with contrasting events much like what you’d see at the circus, but in time you became inured to the side events as you focused watching the excitement of the story unfold. And you were quite gripped as it evolved simply because Alden made it coherent.