By dawn7 on November 28, 2012Comments Off on Wife of Suspected Shoplifter, Vidal Calloway, Blames Wal-Mart Employees for his Death 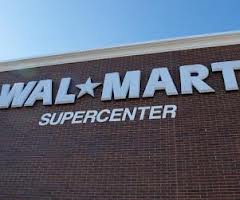 Fatimah Calloway, the wife of Vidal Calloway, suspected shoplifter at a Wal-Mart in suburban Atlanta, blames Wal-Mart employees for the death of her husband.   She does not think he should have died over two Blue-Ray Players.

Vidal Calloway was stopped around 1:30 a.m. Sunday morning as he tried to leave Wal-Mart with the Blue-Ray Players; an employee asked him for a receipt.  According to the police report, when he could not produce one, he ran out of the store; but the store manager, Michael Burton grabbed him and slammed him to the ground.

The police report goes on to state Calloway became defensive and fought back; he punched Burton in the face, neck, and chest.  A security guard, Jaiviere Pruitt, joined in the melee, and the three men wrestled on the ground with Calloway in a headlock.  Phille Roberts, a third employee joined in and helped hold down Calloway; according to Roberts, the guard “told the suspect to tap when he can’t breathe.” (clarionledger.com)

By the time the police arrived in the Wal-Mart parking lot, the trio told them the suspected shoplifter had been resisting them; however, the arresting officers noted no resist.  According to officers at the scene, Calloway was unresponsive and was bleeding from the mouth and nose.

Emergency services responded, though by the time Vidal Calloway arrived at the hospital it was too late, he was pronounced dead on arrival.

Fatimah Callowayis understandably upset by the tragic outcome of the death of her husband, “I can’t believe it,” she said. “When they said he

stole the DVD player, I wouldn’t put it past him.”  (ajc.com)

Vidal Calloway has a long history on the wrong side of the law; he has a history of substance abuse, theft, shoplifting, and forgery.

Wal-Mart’s formal position as stated by Wal-Mart spokeswoman Dianna Gee is, “Associates are trained to disengage from situations that would put themselves or others at risk,” she said in a prepared statement.  (ajc.com)

Store manager Michael Burton and security guard, Jaiviere Pruitt, have been suspended without pay while the investigation is with the police department.  The third employee was contracted out through a private firm and will not be asked back.

Fatimah Calloway is right, Vidal Calloway should not have been killed over two Blue-Ray Players; still, he had some personal responsibility in his own death.  He was committing a crime, and in the course of the crime he reacted in a violent manner.  Would she be sitting in a courtroom in allegiance with him if he had caused a fatal blow to the store manager?

The trio acted in an overzealous manner; albeit, tensions must have been running very high with Black Friday, the threat of picketers at the monster chain.  Wal-Mart executives have a responsibility to ensure employees are prepared for shoplifters and other disgruntled shoppers or crazy incidents, especially in this economy and at this time of year.

Echoing a corporate policy after a tragedy does little to assuage the grief of a family who has just lost somebody; but sorry Fatimah, there is

such a thing as personal responsibility.

Wife of Suspected Shoplifter, Vidal Calloway, Blames Wal-Mart Employees for his Death added by dawn7 on November 28, 2012
View all posts by dawn7 →