Boehner and his fiscal problem 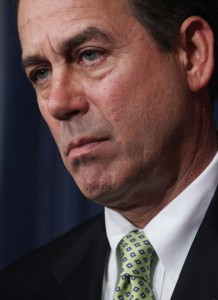 Speaker Boehner (R-Ohio) has been put in a tough position; and that’s that Boehner must stand with his fellow conservatives or stand with the country and work with Democrats.  Conservatism is not the majority in America as republicans saw in this past election. So conservatives are scrambling to buy whatever politicians they can to stay relevant.  If that politician goes against them then they lash out and call for them to be voted out of office or in Speaker Boehner’s case to be removed as speaker.  So for speaker Boehner it seems as if he just can’t win because if he agrees to anything with President Obama or Democrats then he may lose his speakership.  On the other side if he stands his ground and retains his conservatism then he still faces to be voted out but this time by the people who count, voters in his district.  Let’s not forget that Ohio went for President Obama and more than likely would have voted Boehner out if it weren’t for redistricting by the republicans.

Now not to say conservatism is dead but when the majority of the country votes against a conservative presidential candidate and a few Senators even almost ousting tea party favorite Senator Michele Bachmann that says a lot about the direction in which Americans want to go with America. 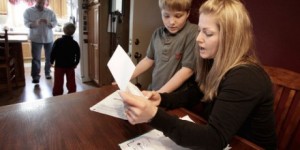 Americans went to the polls in droves and voiced that they prefer to give a helping hand to those that need it.  Not the 2% who hide revenue in offshore accounts never to pay taxes but expect Uncle Sam to give them a tax break.  Why should the federal government give these individuals anything when they aren’t contributing back to the system.  Sure one can say they hire workers but really are you helping those same workers to climb the corporate ladder? Providing the best wages, working conditions?  Are you having your product made in America and investing in American made products.  For example, buying American cars instead of foreign cars that boost other countries’ economies.  So why should the federal government give a tax break to the wealthiest of Americans instead of those that actually pay taxes.  It’s the 98% that see portions of their paychecks taken by the government and actually go shopping at retail stores, gas stations.  They are the ones that help increase profits for the 2% who in turn get huge profits and bonuses.  It’s the 98% that deserve atax break, many of whom can  use to stay in their home, save for retirement, pay off a credit card bill(s.)  Things that the 2% don’t have to worry about but Boehner and company that is who they want to protect.  Yet instead of attacking the 98% (the majority,) republicans should be looking at ways to tighten regulations for those on welfare.  One can agree that yes it is sad to see people on welfare like it is their job just using up a resource that was meant to assist not live on for forever.  There definitely should be some tougher rules but it is only a small percent of the 98% that are abusing this valuable resource that was meant to be temporary.  So republicans shouldn’t demonize one particuliar group as welfare abusers because in fact the number one group on welfare is white but you won’t hear that fact from many sources.  It goes against the stereotype that they hold for those on welfare.

So Boehner should turn his back on those wanting to take his speakership, and go for what the American people want and that’s to allow the bush tax cuts for the wealthiest Americans to expire and to keep the tax cuts for the middle class.  Will it really hurt the 2%? Will it really stop them from being able to pay a bill or stop them from living their lifestyle?  If the likes of Warren Buffet and Bill Gates don’t mind  not receiving their annual tax cut then why are the other 2% complaining, most don’t even pay their fair share just look at Romney and  the only couple of years that he may of paid taxes.  You get from the system what you pay into the system and that should go for both the 98% and 2% of Americans.

One Response to "Boehner and his fiscal problem"