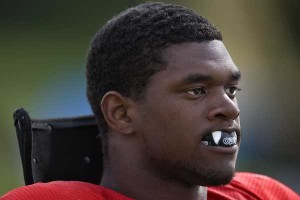 KANSAS CITY, Missouri — Kansas City Chiefs linebacker Jovan Belcher and girlfriend Kasandra Perkins were an extremely happy couple according to the family of the slain girlfriend. Hence, news of the alleged murder/suicide took the family by surprise.

As reporters dig deep into his past, all anybody seems to come up with is that Belcher showed no indication he was capable of killing his girlfriend.

TMZ has learned from members of Kasandra’s family that Jovan and Kasandra always seemed to be in love. In fact, when Kasandra became pregnant, she and Jovan were “ecstatic.” The family says ever since the baby was born in September, the two couldn’t have seemed happier together.

The 22-year-old’s family says they haven’t the slightest idea as to why the relationship took a tragic turn this morning — when Jovan allegedly shot and killed Kasandra before taking his own life — and news of their deaths was both devastating and unexpected.

Jovan started playing with the Chiefs in 2009 — and Kasandra, who is originally from Texas moved to Missouri to be with him.

though he grew up on Long Island, N.Y., playing linebacker, offensive tackle, nose guard, fullback and special teams at West Babylon High School,  he was, nevertheless, at his best on the wrestling mat, where he earned All-America honors three times.

In his first season with the Chiefs he primarily played on special steams.

The linebacker with the friendly smile was promoted to a starting linebacker position in 2010.

He rose to the occasion as he had 120 tackles that season.

KANSAS CITY, Missouri — Kansas City Chiefs football players are in route to Arrowhead Stadium for an emergency meeting as reports from every major news media outlets awaits the release of the player’s name that police say shot his girlfriend, critically wounding her and then shot himself in an apparent suicide. Kansas City Chiefs’s home stadium was placed on lock-down ever since early morning.

Update: Apparently, Belcher’s girlfriend did not survive the shooting.

The 25-year-old, Belcher, whose girlfriend recently gave birth to a daughter, was in his fourth season with the Chiefs and his third as a full-time starter after joining the Chiefs as an undrafted free agent from the University of Maine.

At some point early Saturday morning, Belcher shot himself at the team’s training facility after shooting his girlfriend at another location.

Local reports told say that police received a call from a  woman who said her daughter was shot by her daughter’s boyfriend, a Kansas City Chiefs player.

Police reportedly arrived at Arrowhead Stadium to find a male with a handgun to his head in the parking lot of the practice facility, speaking to a few people, according to reports.

At that point, police knew that the male with the gun was the suspect in the shooting at the first location.

According to KCTV-5 News in Kansas City, the player shot and killed his girlfriend at a house near 54th street and Chrysler Avenue on Saturday morning.

Then Belcher drove to a practice facility near the team’s main campus and took his own life.

As the such for answers goes on, by all accounts, Belcher showed no signs of having any issues, past or present.

He was know to train hard, practiced hard, and didn’t miss a game. His colleagues say Belcher was a good teammate in the locker room. He also was a regular participant in charity appearances, including a visit to Fort Leavenworth, Kan., this past spring to pay tribute to the troops and a stop at Oak Grove Elementary in Kansas City last fall as part of the NFL’s “Play 60” initiative.

The only words to describe such a painful event is that is was a tragic murder suicide, which seemingly came out of nowhere.