Series of 11 Earthquakes Rocked the Island of Japan Friday 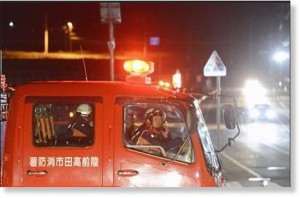 Early Friday morning Kamaishi, Japan was violently rocked by a magnitude 7.3 earthquake. The powerful tremor brought tsunami warnings, which were followed by a one-meter tsunami. It hit at Ishinomaki, in Miyagi, at the center of the devastation from the March 2011 disaster.

The powerful quake centered off northeastern Japan shook buildings as far away as Tokyo, but there were no reports of deaths or serious damage.

Reportedly, Japanese officials have express concern over the serious of quakes that are erupting through Japan.

Only minutes after being hit by the larger quake the country was hit with a 3.1 91km W. of Cape Yakataga, Alaska, followed by another strong quake 218km SE of Ofunato, Japan.

Seismic movement on the Island then began to pound Japan with an earthquake almost every 10 minutes with a 3.4, 5.5, 4.7, 4.7, 4.8, 4.6, 5.0, 4.7, 4.8, and the last tremor occurring just moments ago was a magnitude 5.0 quake.
Most of the quakes in this series hit approximately 200km ESE of Ishinomaki. The U.S. Geological Survey considers these quakes aftershocks. However, Japanese official have pointed out that the are still fairly dangerous.

In all, the Island has taken an unusual pounding this Friday, quite reminiscent of the series of quakes that hit Alaska all last week until they experience a strong 5.8 tremor on Monday.

Today’s big quake had a preliminary magnitude of 7.3, the U.S. Geological Survey said.

It also said that thousands of coastal residents were ordered to evacuate to higher ground. The tsunami warning was lifted two hours after the tremor struck.

It will be recalled that the March 2011 earthquake and the following tsunami in the country killed nearly 20,000 people and triggered the world’s worst nuclear crisis in 25 years. when the Fukushima-Daiichi nuclear plant was destroyed, leaking radiation into the sea and air.

Workers at the plant were ordered to move to safety after Friday’s quake.

Tokyo Electric Power Co, the operator of the Fukushima nuclear plant, reported no irregularities at its nuclear plants.

All but two of Japan’s 50 nuclear reactors have been idle since the Fukushima disaster as the government reviews
safety.

The quake measured a “lower 5’’ in Miyagi prefecture on Japan’s scale of one to seven, meaning there might be some damage to roads and houses that are less quake resistant.

The scale measures the amount of shaking and in that sense gives a better idea of possible damage than the magnitude.

The quake registered a 4 in Tokyo.

The one-meter tsunami hit at Ishinomaki, in Miyagi, at the center of where the devastation resulted in the March 2011 disaster.

All Miyagi trains halted operations and Sendai airport, which was flooded by the tsunami last year, closed its runway.

Five people in the prefecture were slightly injured.

I was in the center of the city the very moment the earthquake struck.

I immediately jumped into the car and started running away towards the mountains. I’m still hiding inside the car,’’ said Ishinomaki resident Chikako Iwai.

I have the radio on and they say the cars are still stuck in the traffic. I’m planning to stay here for the next couple of hours.’’

There are vast areas of Ishinomaki that still have not been cleaned up since last year’s tsunami.

Many houses lie in ruins, full of rubble. Workers by the shore still sort through thousands of cars that were swamped
and destroyed.

The cars are piled up and being stripped for parts and scrap.

Narita airport outside Tokyo was back in action after a brief closure for safety checks.

There were small tsunamis, measuring in the centimeters, elsewhere near the epicenter.

Last year’s quake, which measured 9.0, triggered fuel-rod meltdowns at Fukushima, causing radiation leakage, contamination
of food and water and mass evacuations. Much of the area is still deserted.

The government declared in December that the disaster was under control.

Prime Minister Yoshihiko Noda cancelled campaigning in Tokyo ahead of a Dec. 16 election and was on his way back to his office, but there was no immediate plan to hold a special cabinet meeting.

Public spending on quake-proofing buildings is a big election issue.

Japan is one of the world’s most earthquake-prone countries, with a tremor occurring at least every five minutes.

Located in the “Ring of Fire” arc of volcanoes and oceanic trenches partly encircling the Pacific Basin, the country accounts for
about 20 per cent of the world’s earthquakes of magnitude 6.0 or greater.

Tokyo, with a population of 12 million, sits on the junction of four tectonic plates: the Eurasian, North American, Philippine and Pacific.

The sudden bending or breaking of any plate can trigger an earthquake.

Warnings of the tsunami height had varied between 50cm and 2m.

Buildings were reported to have swayed violently in Tokyo.

Randy Baldwin, of the U.S. Geological Survey said: “this may be considered an aftershock itself,” from the 2011 temblor, as the tectonic plates under the region are still settling into place.

The earlier warning said the tsunami in northeastern Japan could be as high as 2 yards, but reports on Japanese television warned of a wave only about half that high.

While we were reporting the first earthquake a 6.2 magnitude hit and then a series of 9 others followed suit.

The Guardian Express will continue to provide updated news on events in Japan.

The Guardian staff contributed to this report.