By DiMarkco Chandler on December 19, 20129 Comments 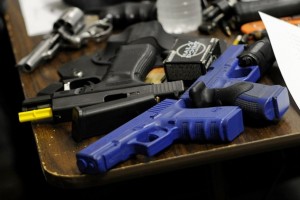 Rep. Louie Gohmert, R-Texas, said Sunday that if the school’s principal had been armed, she might have been able to prevent some or all of the carnage that happened Friday.

“I wish to God she had had an M4 in her office locked up and so when she heard gunshots . . . she takes his head off before he can hurt those kids,” Gohmert said.

Dan Gross, president of the Brady Campaign to Prevent Gun Violence said: “There are 40 people behind me who would love to respond to that,” Brady president Dan Gross said at a press conference, according to Politico. “It’s insane . . . Think about what that’s saying. It’s saying the only answer to violence is more violence. The only answer to guns is more guns.”

I have nothing else to say, except look where Gohmert is from. He might as well get himself a bumper sticker that says More Guns Saves Lives.