Why Kim Kardashian and Kanye West Would Make Beautiful Babies Together 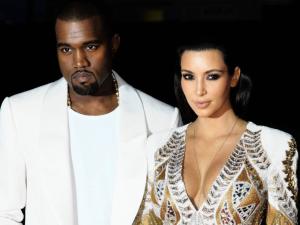 A.k.a. Top Three Reasons why KimYe would belt out the most beautiful K-Yeezy’s

Before we begin, Kim Kardashian is not pregnant. At least not yet she is.

The brunette beauty has admitted in the latest issue of OK! online that she would love to have twins and in a previous interview with the View the starlet agreed that rapper-boyfriend Kanye West was a perfect match and that “Kids is definitely something I want, I think I wanted that before.”

Let’s not forget the famous milk in my coffee innuendo Kim tweeted in September:

“Mom- want any coffee? Me- yes please Mom- how do u take it? Me- half coffee half milk. Just make it the color of what my kid would be”

So what would happen if the milk did meet the coffee? Here are the top three reasons why America’s most famous buxom-butted beauty and the Can’t Tell Me Nothing rapper would create the most beautiful young Yeezy’s:

1)     Beauty (a.k.a. The Kardashian family genetic gene pool): Whether you love ‘em, hate ‘em, or can’t keep up with them – beauty runs in the Kardashian family. Kim especially has emerged as a beauty icon (she was also the most searched female celebrity of 2012!) and has been praised for her sculpted cheekbones, flawless skin and flowing raven locks. She is frequently listed as one of FHM’s top 100 sexiest women in the world and last year graced the debut cover of the World’s Most Beautiful magazine. Let’s face it. Kim has the beauty, the body and well…the booty. More likely than not, the beauty gene will pass on to her kids.

2)    Style: Esquire Magazine once called Kanye the “fashion icon of our time” and said he was “an evolving ideal, a man who moves with the times, and moves them forward.” The self-proclaimed Louis Vuitton Don (the rapper designed a line of signature sneakers for Louis Vuitton) has referenced reinventing his personal style so that his clothes would complement rather than compete with him (it is what he has dubbed his “Rosewood” movement). Style is all about class and matters, according to Kanye in an interview with DJ Clue on Power 105.1. “That’s the Rosewood mentality, like affluence, like not cursing loud in public, pulling out chairs for your lady, opening up doors…calling your mother…taking care of your kids.” With Kanye’s style gene – KimYe’s kids will not only have good fashion sense, but class and good manners to boot!

3)    Brains: Say what you will about the couple, but they’ve got the brains to capitalize on their celebrity status and make money. Kanye is a world-renowned rapper and producer with an estimated total net worth of about $90 million and his reality-star/entrepreneur girlfriend has a net worth of about $35 million.  Both have used their heads to explore business ventures outside their respective trades. In addition to the collaboration with Louis Vuitton, Kanye has created his own line of sneakers with Nike called Air Yeezys as well as a women’s fashion line called DW Kanye West. Kim’s claim to fame mainly came from her reality-star status, but she has branched out to become an entrepreneur, jewelry designer, model, actress and singer (remember 2011’s Jam (Turn It Up)? Never mind – maybe you shouldn’t). Let’s hope the ‘smart’ gene passes down to their children. Because with beauty, style and brains they’ll be unstoppable forces.

At the rate KimYe is going (the two have been tweeting and instagram-ing pics of their hot-and-heavy relationship like crazy the past eight months) they’ll have little monsters running around in no time.

The 32-year-old Kardashian is currently on a promotional tour in the Middle East, but she still has one tiny issue to deal with: Her hubby! Well, estranged husband. According to the latest reports, Kim has allegedly refused to give back her 20.5 carat diamond engagement ring to Kris Humphries, which is worth an estimated $2 million (rumor has it, he got it on sale.)

Enstarz today reported that even Kanye is getting increasingly angry as he wants to settle down with his boo.

Kim filed for divorce from Humphries, a Brooklyn Nets forward, in October 2011 after 72 days of marriage. According to Kim’s lawyer, her client is practically handcuffed to the NBA star as he and his lawyers drag out proceedings (Humphries is seeking an annulment based on fraud, but his attorneys claim they need more time to collect documents.)

A trial date is set for mid-February 15 to either dissolve or annul the marriage.

In the meantime Contactmusic reports that Kim and Kanye are looking for a home in London, England – because of their shared love of British culture.

Hmmm….with today’s announcement that Prince William and Kate Middleton are expecting their first child – can anyone see a royal playdate?

Why Kim Kardashian and Kanye West Would Make Beautiful Babies Together added by nmlorde on December 3, 2012
View all posts by nmlorde →