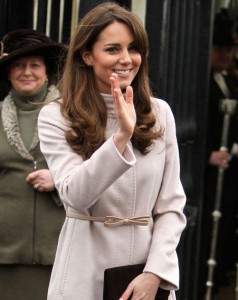 In about 6 months, the third in line to the royal throne will be prancing around (or more likely sleeping peacefully in her mother’s arms) at Buckingham Palace.

If you haven’t already heard (if that’s the case, please sign up to have news feeds delivered to your phone), well-wishes have been tweeting in from across the globe after it was announced that Prince William and Kate Middleton (in Royal terms, the Duke and Duchess of Cambridge) are expecting a little one!

If you remember the reaction from the royal wedding, well, buckle up – we’re in for the long haul with this one!  Royal bloggers will provide us with in-depth coverage concerning everything about the upcoming newborn, from the birth, first birthday, first girlfriends (or boyfriends), Vegas trips…perhaps I’m getting ahead of myself.

“The Queen, the Duke of Edinburgh, the Prince of Wales, the Duchess of Cornwall and Prince Harry and members of both families are delighted with the news,” a rep from Buckingham Palace said.

Tweets and much-deserved well wishes exploded from across the globe. According to eonline.com, President Barack Obama and Michelle Obama were among the first to comment:

“We extend our congratulations to the Duke and Duchess of Cambridge on the welcome news out of London that they are having their first child,” read the statement.

British Prime Minister David Cameron: “I’m delighted by the news that the Duke and Duchess of Cambridge are expecting a baby. They will make wonderful parents.”

Not to be outdone, the Kardashians even weighed in on the praise!

As for Khloe: “Congratulations to the Duke and Duchess of Cambridge!! A royal baby!!! 🙂 awwww so sweet”

Of course the health and well-being of the baby is top priority on mama and papa-to-be’s list. Middleton had to cancel her forthcoming planned royal appearances for this week while she remains hospitalized and recover from morning sickness, according to Buckingham Palace.

British press reports that Kate appeared fine in a public appearance on Friday and was photographed eating a meal. She arrived at the hospital in a car, not an ambulance.

Kate’s hubby’s schedule remains unchanged, for now. Buckingham Palace reports that William will “continue the current tour of duty with the Search and Rescue Force” through next summer.

Will and Kate are scheduled to attend the royal premiere of The Hobbit on December 12th, along with Peter Jackson, Martin Freeman and Ian McKellen at the London screening.

Although there’s no word yet on whether or not Kate will be up to attend this particular event – the world will be watching!