NHL hockey is back! But at What Cost? 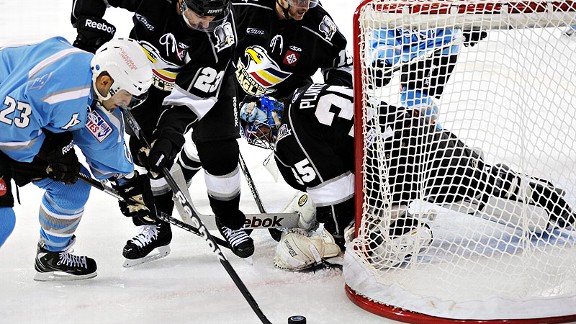 NHL Commissioner Gary Bettman and team owners would prefer fans to remember the marathon 16 hours plus of tough negotiations this weekend that finally produced an agreement for NHL players to return to the ice. However, I’m guessing fans will remember the 113 day lockout that slowly limped along until both sides decided to get serious. Oh yea, NHL hockey is back, but at what cost?

Who cares about reports that U.S. federal mediator Scot Beckenbaugh (involved in the 2004-2005 lockout) was able to bring the two sides together for a marathon collective bargaining session Saturday after shuffling back and forth between the groups separately on Friday. Make no mistake about it, the league has once again damaged its brand as corporate clients race towards the exits, according to Forbes.

Two large companies, Accenture and The Hartford have reportedly told clubs they are no longer interested with purchasing full-season seats. In other words, they’d rather buy tickets on a per game basis. And their not the only ones lining up at the exits.

This lockout might prove to be a colossal nightmare for a league that just eight years ago escaped a bullet when it shut its doors to both fans and players.

It was before the economic plunge, and though it took some time for fans to finally get over that ghostly year, professional hockey recovered. This time it appears the owners might have cooked their own goose because a large number of corporate season ticket buyers appear to be not only using the lockout to cut back on expenses, but as Forbes put it, they won’t be returning “anytime soon.”

That brings us to the question: why? Why did the NHL owners decide they had to take a stand now, with the U.S. economy only a few paychecks away from another recession? Moreover, why would they jeopardize their bread and butter corporate clientele, which brings in approximately 40% of their gate revenue? Why?

Was the Player’s share of revenue too high? In 2005 they agreed to 54% and it only climbed up to 57% in 2010-2011. They treaded these waters during the last lockout; and though the figure is higher than the NFL or the NBA, when you closely examine how the league defines its revenue, everyone, though reluctantly, agree that the NHL players’ share is on a par with other professional sport leagues.

No way, not how should it have taken 113 days to iron out an equitable agreement given these and the following facts.

Was the Salary Cap “Floor” the problem? OK, we might find out that this was the issue that kept the doors locked; but does it measure up the potential of losing a significant portion of revenue? It’s likely that without the big corporate dollars, owners stand a good chance of losing a great deal more. Players were certainly going bond together on this issue; yet-in-still, the owners wanted to reduced floor that was already $16 million below the salary cap. The player’s nor their fans would ever side with owners on this issue because it’s one of the few areas that helps the smaller markets compete. No matter how you look at it, a salary floor helps distribute the earning potential for all thirty NHL teams.

Did the leagues current Revenue Sharing and Escrow Payment agreement provoke the long lockout? The Revenue sharing issue not only puts the players and the fans on the same side of the argument, the smaller markets had to be cheering for the players as well. After all, with a number of teams located in weak markets, doesn’t it make sense for the wealthiest teams to want to preserve the leagues present infrastructural instead of watching small market teams suffer significant revenue loss year after year. Clearly, a more balanced NHL would make hockey games a lot more interesting to watch. In addition, the Escrow Payment also poses a problem for smaller markets. The player’s believe that money is constantly misused to prop up teams seeking new owners. In the end, the practice limits the amount of revenue shared when it comes time to divide it up. Arguably, both of these issues seem to highlight how greedy the league’s richest teams are.

What may be the most important issue in all team sports is the Guaranteed Contract. In fact, one could wage a strong argument that the Guaranteed Contract is extremely important for hockey players. Once again, fans would most certainly side with hockey players that play a sport where a significant number of careers are cut short due to injury. Let’s face it folks, in a sport that condones and rather even encourages fighting, it stands to reason players would want a contract that allows them to go to sleep at night. Therefore, given the dangers of the sport, who can blame them for wanting the reinsurance that a Guaranteed Contract would give them.

Yes, NHL hockey is back, but at what price did the league expose themselves to. In the rational mind, the issues of disagreement just didn’t seem to rise to the level of risking the game’s survival. But the owners thought it was worth a 4 and a half month lockout.

So you ask, is the deal really done? Don’t both players and owners have to agree to the new terms?

Folks, its a formality; you can bet NHL hockey is back, but not without losing fan enthusiasm, corporate dollars, and perhaps its growth potential.

The league will salvage the year. When it opens its doors for the second half of the season and the Stanley Cup Playoffs, they’ll draw a fair measure of fans. But it’s going to be a short season and a long off season. People will have time to think. And in my opinion, unless the owners can pull a rabbit out of the hat, time to think might not bold well for this greedy bunch.

My guess it that once the details of the new CBA are known, they too will contribute to animosity and rebellion from those that love the sport but have been cheated once again by a small group of rich owners that hold the keys to the ice.

According to Hockey Night, in Canada’s Elliotte Friedman the sides settled on a seven-year maximum term for free agents (eight if the team is re-signing its own free agent). Friedman also reported the deal is for 10 years with an opt-out after eight, and that the NHL came up from its original salary cap demands, from $60 million US to $63.4 million.

On variance, according to Friedman, they agreed that the lowest-paid season of any multi-year deal can be no lower than 50 per cent of the highest season.

So a series of proposals and counter-proposals after 113 days has sadly come down to something that I imagine could have been agreed upon last summer.

Of course the topic of conversation in newspapers this week will highlight the fact that the players loss $30,000 US on average per cancelled game with owners taking an even bigger hit.

And they’ll talk about roadblocks and differences on issues like next year’s salary cap, pension plans, salary variance and contract limits as reasons for the long lockout.

They’ll offer excuses that they say amounted to major bumps in the road along the way, and in the end they will tell us that at least they avoided the loss of a full season.

Owners like Pittsburgh’s Ron Burkle, Toronto’s Larry Tanenbaum, Tampa Bay’s Jeff Vinik and Winnipeg’s Mark Chipman who were part of the team of negotiators will seem optimistic as they will perhaps stand together during a press conference and say what they always say to placate the voiceless victims that buy tickets and in some ways fund fiascoes like the present drawn out revolt.

Don Fehr will perhaps even claim the sides had always been close on core economic issues.

The NHL, the only major North American sports league to ever cancel a full season because of a labor dispute has pushed the envelope a bit to far this time, and its time they pay a cost.